I almost started today out with the same opening bit I've been using and re-using since Blissemas started...

But today is MY blissemas day, so hello! I don't have to send you anywhere today, because you're coming here to say hi!

This year's been an exciting one for me. I published my very first full-length novel on February 25th, followed by my second in March, and my third in December (yesterday, as a matter of fact). I also published a collection of short stories in January and edited a collection of short stories in December. I have another novel coming out next week, one in January, one in March and one in June of next year.

I have always appreciated editors. Never so much as now, when I know exactly how hard they work, having done it myself! (I loved working on Coming Together: Among the Stars quite a lot, and I'm currently working on a proposal for a new anthology for next year... )

When I was writing Roll, my editor put in a plaintive "you skipped Christmas" in the margins when she was doing the first content edits. I didn't really want to write about it; there's a severe class difference between Beau and Vin, Beau's spending Christmas with his Very Wealthy Rich Boyfriend and his Very Wealthy family at their house in Napa Valley. (as opposed to the penthouse in Chicago, the lake house, or the ... you get the idea...) I knew it was going to be awkward and uncomfortable for Beau, who is the son of a farmer, and I just wasn't relishing the idea of describing people opening presents (also, I didn't want to "go shopping" for a ton of book characters... )

But with my editor's pathetic little begging for a Christmas scene, I went back to the drawing board and came up with what has since become my favorite scene in the novel...

Beau sat up in the bed and scrubbed at his face with one hand. He hadn't eaten much, with his stomach tied in knots. The food -- as fantastic as it probably was -- had been unfamiliar and ritzy. It had probably all been delicious, but his nerves wouldn't let him enjoy it. Baked Camembert and sundried tomatoes. Pear slices wrapped in smoked ham with almond slivers. And what the hell was crème fraiche? And who the hell had fish for Christmas dinner, with or without toasted shallot vinaigrette?

"And what's so wrong with baked turkey and dressing?" Beau said. The room didn't have an answer. "And now I'm sitting here in the dark by myself, talkin' to myself. Fan-freaking-tastic."

There'd been pie, he recalled. Three different sorts: one mincemeat, one apple-enchilada thing that didn't really look anything like pie as Beau was familiar with the term, and one honest-to-God pumpkin pie.

His stomach really wanted to crawl out of his mouth and go hunting for food on its own.
What was the worst that could happen? Beau slipped out of bed, his joints popping softly in the darkness like those last few, stubborn kernels of popcorn.

Beau shook his head; it was getting pretty bad when his internal monologue was making food analogies. He pulled on his sweatpants and padded, barefoot, out into the hall, down the stairs, and back toward the kitchenette.

Cold fridge light spilled everywhere, shining brilliantly into Beau's face. "This thing's larger than my dorm room," he said. Everything was ingredients. Fresh fruits and vegetables were lined up neatly in their crisper drawers. Cheeses and wrapped paper packages of sliced meats snuggled in the drawer. Plastic cling covered a defrosting roast.

"I thought I heard you get up," Vin said, sliding up behind him and wrapping warm arms around Beau's stomach. "Hungry?"

Beau suppressed the urge to leap out of his own skin.

"Don't you people believe in leftovers?" Beau gestured at the industrial-sized appliance in annoyance, trying to calm his heart. He was certain that Vin could feel his heart throbbing erratically in his chest and not entirely certain what emotion it could be attributed to. Was he startled, guilty, or just excited to be up, in the dark of night, with a handsome man's arms around him?

"Camilla takes it over to the homeless shelter, after dinner," Vin explained. "We always have more than we need."

Great. Add a heaping helping of feeling greedy to his already full plate of less than pleasant emotions. "You've missed out, babe," he said, "if you've never raided the fridge for a leftover turkey sandwich."

"I'm not missing out right now," Vin said. He nipped at Beau's ear. All of their own accord, Beau's arms went around his boyfriend, pulling him closer. Vin backed him up, braced against the cool steel of the fridge and gently, slowly, traced a line of kisses from Beau's ear to the corner of his mouth. The faint rasp of Vin's stubble against his upper lip drove Beau crazy.

"Oh, would you kiss me already, for Christ's sake?" Beau demanded, grabbing a handful of Vin's unruly hair and pulling his mouth down.

"How about I get you some pie before you wake up the house," Vin said, laughing. "I know where Camilla keeps her stash."

Beau warred with his two hungers. "Kiss, first," he said.

Honestly, it's a pie. It's probably not a really big deal, but that poor freaking pie has been edited 5 times now and in the current print, it's WRONG. 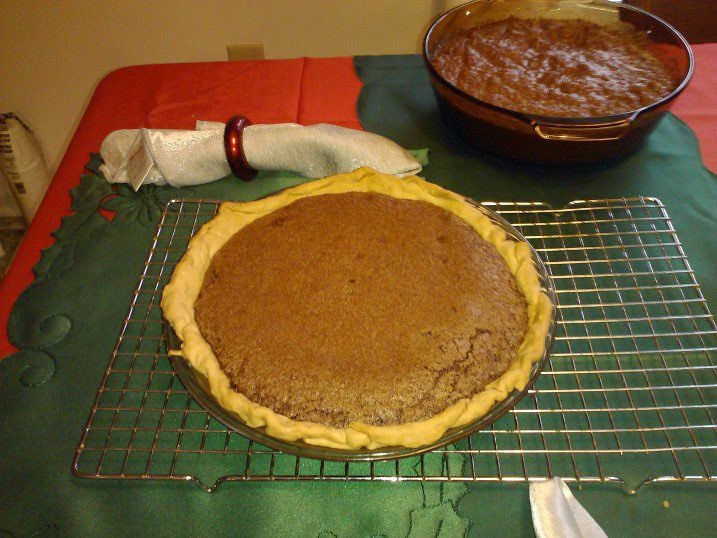 So, here's a recipe for chocolate chess pie, from one of my favorite cookbooks, the Southern Sideboard.

This is my actually my second favorite kind of pie - I prefer buttermilk chess, but no one else does, so I make chocolate. It's what I make for holidays all the time because I loathe pumpkin so much I can't even stand to make it for other people... (I just hate pumpkin. yes, your pie, yes your mother's pie, yes, my mother's pie. UG. Also, anything with pumpkin IN it, like muffins or god forbid, coffee. Why the hell would you torture a perfectly good cup of coffee like that??)

Don't forget to leave a comment on this entry to be eligible to win a kindle paperwhite loaded down with smut, including Roll, the novel excerpted above...

The Second Mango by Shira Glassman

Queen Shulamit never expected to inherit the throne of the tropical land of Perach so young. At twenty, grief-stricken and fatherless, she's also coping with being the only lesbian she knows after her sweetheart ran off for an unknown reason. Not to mention, she's the victim of severe digestive problems that everybody think she's faking. When she meets Rivka, an athletic and assertive warrior from the north who wears a mask and pretends to be a man, she finds the source of strength she needs so desperately.

Unfortunately for her, Rivka is straight, but that's okay -- Shulamit needs a surrogate big sister just as much as she needs a girlfriend. Especially if the warrior's willing to take her around the kingdom on the back of her dragon in search of other women who might be open to same-sex romance. The real world outside the palace is full of adventure, however, and the search for a royal girlfriend quickly turns into a rescue mission when they discover a temple full of women turned to stone by an evil sorcerer.

A Russian Bear by CB Conwy

To Mischa, life is simple. Doms are Doms and subs are for fucking, flogging, and bossing around. Until he meets Tom, that is. Tom is deeply offended when the stranger in the bar takes him for some kind of slave boy. Well, offended and more than a little excited by the thought of surrendering to Mischa. Mischa being Mischa, their meeting results in Tom losing his virginity in a way that's hotter than even his wildest fantasies.

Mischa is drawn to Tom and makes another appointment. And then another, initiating Tom to every kink Mischa knows. They aren't scenes, of course, because Mischa has a "one boy, one scene" rule. But then again, Tom isn't exactly like his usual boys, and Mischa finds himself falling in love, though nowhere near ready to admit it. Luckily, Tom isn't exactly your stereotypical slave. Life is good -- until Tom gets attacked, and Mischa has to fight harder than ever to make Tom realize that he isn't going anywhere.