Put a Bow on It

(That fits everyone's beliefs and offends as many people as possible.)

I'd say I'm sorry I've been MIA, but I'm not. I spent 10 days in Orlando, Florida, which was excellent, and I'm not sorry about that. Here, have a picture! 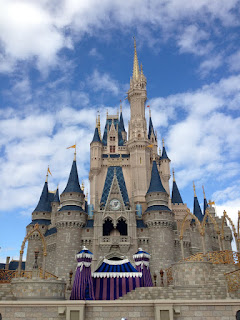 As I had to explain this while down in Florida, here's the quick and dirty: MFQ = Maximum Fun Quotient. The time after MFQ is reached, no matter how fun an activity, no matter how much you've been looking forward to it, etc, you just cannot have any more fun. You are tired, or overloaded, or both. Toddlers reach MFQ fairly quickly.

As one of the bout of tears had to do with the fact that we cannot take live baby ducks home, I sort of wrote that off as MFQ.

In the real, non-Disney world: One of my stories returned home to me, unpublished. This is not because it wasn't good; in fact I am assured by the editor that it was, actually, very good and would have been accepted for publication except that the editor is having a hard time of things and just doesn't feel she can get the book out any time soon, so has put the project on permanent hiatus. I'm mildly sad about this, since I really adore this editor, and I would have loved to have a project with her name on it. On the other hand, I'm delighted that she liked my story, even if I can't, in the interest of politeness, tell you who she is. I did some looking around and turned the story around to someone else; hopefully I'll find a home for it. If not, I might offer it up as a free-read or a 99cent Amazon deal. We'll see. Amazon's stuff confuses me.

I'm deep into the "I hate Christmas" part of the year. My hand to god, one year, I'm just gonna snap and there will be Rudolf guts everywhere. My family drives me crazy in the most well-meaning sort of way. I never feel like I've done enough, or can buy enough, and those feelings in and of themselves make me crazy because that's NOT what it's supposed to be. And hell's bells, I'm not even Christian, so why am I doing this anyway? Except that I would feel MORE bad if I didn't, and honestly, I have enough guilt to lug around without deliberately adding to the stack.

My writing schedule is finally Not Whack, which is good.

I have 2 more chapters in Blood Sight to write, and then it'll be time to dig into the re-writes and edits. I have cut 20,000 words out of Marked Man so far, with another 30-45k to go. I am almost done writing Blister Effect (6k out of 9-10k). I have detailed out the plot for Wind Counterclockwise, a B&S Menage piece, expected to run 15 - 20K. I have re-read and started plotting for the rewrite of Circle in the Sand, a co-written Menage novel with my dear friend Elizabeth L. Brooks. I have plotted out the story for a 10 - 15k m/m novelette called Roll. I have plotted out the story for a f/f short 3,500 - 5k words story tentatively called Alive and Kicking. I also have tentatively decided to write a 10-20k novelette for an End of Days antho.

Out in the wild, I have PBEM, Snake Dance, Which Way the Wind Blows, and Ripped, still waiting to hear; and On the Fly has been submitted elsewhere. Lustfully Ever After has achieved cover-art.

Email ThisBlogThis!Share to TwitterShare to FacebookShare to Pinterest
Labels: Lustfully Ever After, real life, schedule, writing