Ahead of the Storm

So, my Zombie story is out a tiny bit early, since Allessia Brio & Sommer Marsden (and me!!) are all on the East Coast and the possibility of getting creamed by the Frankenstorm (and not in a good way!) exists, this new antho, featuring zombies and sex (but not necessarily Zombie Sex! Although maybe there is, I haven't read it all yet. I'll let you know.) is out a little early.

All proceeds from this collection will go to benefit the American Diabetes Association.
Posted by Lynn at 9:04 AM No comments: 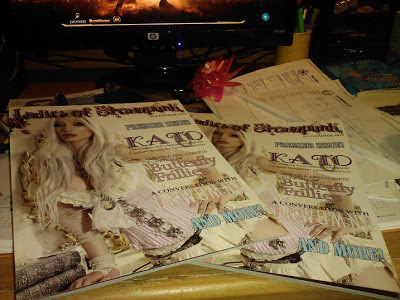 So, I got my magazines in last night; they are quite lovely. To buy a copy - you can get it for your iPad or other e-Readers - go here. Currently, they're on SALE! so this is a good time to pick up one for yourself.

Or, if you'd like, you can win a copy! Just go to my Facebook page and comment on the photo of the magazines. I'll draw one lucky winner on Nov 1st. 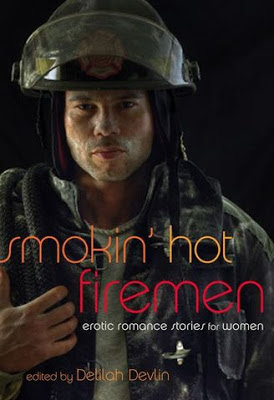 So, here's my latest cover.

Among the myriad other tasks on my plate; writing a chapter in a collaborative novel, finishing up some short stories, and keeping my day-to-day life from running headlong into a brick wall, I have been reading some books by friends.

Tracy is a friend of a friend. She's good friends with one of my good friends, who recently introduced us via Facebook.

The characters more read like Great Gatsby to me, wounded and vulnerable, prone to making terrible decisions in the name of love...

My biggest problem with the book was my tendency to want to shove things in boxes; the story didn't have quite enough steamy details to count as an erotic novel, but waaaay too much sex for a straight-up romance; there are multiple relationships in play here, including a gay romance. There were many tragedies - abortions, miscarriages, deaths, broken relationships, screwed up family life - so it might count as lit-fic, except that all the people who had sex mostly enjoyed it, so, you know... maybe not. I spent quite a while reading it trying to decide what genre Ms. Leung was going for. I never did really come to a conclusion about that.

I admit to spending some time, while reading it, to quoting bits and pieces of it to a friend of mine while chatting online.

The constantly shifting time-line - there were a lot of flashbacks - confused me a bit, and I had to read a little more carefully than I tend to want to. I read really quickly, but sometimes I don't absorb everything, so if the plot is at all complex, I sometimes miss subtle clues.

I confess, I haven't read all of this one yet, so I'm not going to rate it, but I'm letting you all know that it's out there, and that I'll be reading it shortly. My friend and editor and co-writer and everything else she is to me, Elizabeth Brooks, has a short contained in this collection, Succubus, Inc.

Another friend of mine, Robert M. West, has a story in here, Princess Illia. I've known Rob for a long time, back when I used to lecture him about the importance of writing well, all the time. He wrote the most god-awful un-punctuated, bad grammar, sentence fragmented emails it's ever been my displeasure to try to maul my way through to comprehension with. Excepting maybe my mother's emails.

Obviously, a writer doesn't have to be 100% grammatically correct all the time! There are rules in grammar and for business writing that don't necessarily need to be followed in order to write a good story. In fact, frequently those rules can and should be broken. But before you break the rules, you ought to know what they are. And be breaking them deliberately.

We used to argue about this, a lot. It's an email, it doesn't need to be perfect. Well, no, but when I have no idea what you're talking about, you're not communicating, and therefore the purpose of your email has failed. Also, I believe - firmly - that bad habits are... well, habit forming. Writing poorly in emails and correspondence and blogging can lead to sloppy habits in writing stories and therefore you should have some compassion for your poor editor who has to take your jumble of dialogue and make it into a workable piece.

In any case, I'm delighted that Rob's done so well for himself. I don't know if I was ever any help to him, mind you, or if I just annoyed the crap out of him.

Well, Zombies are popular, so hey...


Thank you for submitting your story, "W.O.L.", to the "He Loves Me For My Brainsss" anthology! I greatly enjoyed your story and think it would be a wonderful addition to the collection.


So, there's that. Six stories in print or e-books available - Steamlust, Shifting Steam, Lustfully Ever After, Blister Effect, Ladies of Steampunk Magazine, and Readerotica, Vol 3 - and four more in the pending publication list... Coming Together: Hungry for Love; Duty and Desire; Smokin' Hot Firemen; and He Loves Me For My Brainssss. For a total of 10 publications!

Originally, back in the beginning of the year, I'd wanted to write one short story per month and submit it... that was my goal... So far this year, I've had seven stories accepted and I have three stories still currently "out" although I haven't heard about Ripped in so long I begin to think that antho's either been cancelled or delayed.

I've had a few stories that I started and never quite got to work out in time for an antho submission; Two Tents, and Alive and Kicking are still incomplete and currently shelved. PBEM has been rejected twice and while it's currently "out", I haven't heard anything in a while. Room for Dessert has been rejected several times now, and I think I finally figured out why. I need to find a collection for cheaters and adulterers, since a lot of times, that's considered a No-no for the Happily Ever After part of erotic romance. Steal Not a Moment is out for consideration and I hope to hear back for that collection soon.

I've got 2 stories in the works right now; Surface Tension and Christmas Miracle, plus a collaborative thing I'm almost done with...