Your usual blogger: I'm really excited to have Thomas Grant Brusso here. When JM put out the call for submissions, I decided where I wanted to host my story before I decided the content of my story. Lake Champlain is a really lovely area, and I spent a lot of summers taking the ferry back and forth from Plattsburgh, NY to Burlington, Vermont. I chose the Vermont side of the water for my story. Imagine my delight when Mr. Brusso selected the Plattsburgh side of the same body of water. 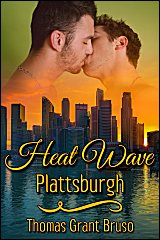 I started publishing my short fiction in August 2014 when JMS Books LLC accepted my first short story, “A Light in the Dark,” a gay contemporary romance. Then in April 2015, my second romance story, “Something Beautiful Remains,” was released. “Heat Wave: Plattsburgh” is my third and most recent story. I had fun writing it. Setting the story in my hometown in upstate New York gave me the opportunity to include the theater at SUNY Plattsburgh as a backdrop for the story. The theater is a magical place and I captured all the dramatic elements of it during those scenes.

“Heat Wave: Plattsburgh” centers around two young men, Jace and Germain, who meet by chance, slowly build an amiable, romantic relationship, and find ways to escape the heat wave that has assaulted the small community. It is a gay contemporary romance.

My story is one of 18 that are included in the Heat Wave anthology series distributed by JMS Books LLC through July and August. Check out the other stories written by the wonderfully talented authors at JMS Books. It is an honor to be part of the series.

“Heat Wave: Plattsburgh” is now available at JMS Books LLC. It will be released through other online distributors on August 16, 2015. Amazon Pre-Order
Posted by Lynn at 5:00 AM