A Chat With Someone Else; S. M. Reine 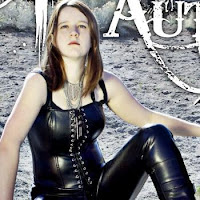 I've read an awful lot of books in the last few days... one of them was 19 Dragons, by S.M. Reine... she's a charming woman, very funny, and I've spent some time "talking" with her across various online mediums, including Twitter.

I have to say first off that 19 Dragons wasn't at all what I expected. I wasn't sure what I expected, but the delightful, witty, and exceptionally poetic novella was NOT it. Truly, a wonderful, wonderful piece... so, Before we get to know my guest a little better, I'd like to say you should probably pick this up, because it's really quite fabulous.

Lynn: Obviously, as a writer, you're just a little on the strange side. What's the oddest thing you do regularly?

S.M.: I disassemble my food. All of it. I don't think I've ever eaten a sandwich by biting the whole thing. Instead, I eat the cheese rolled around the tomato, then shred and devour the meat, and then eat the crust of the bread, and... oh, you get the idea. I'll even do it to whole foods, like bananas.

Lynn: Tell me about how you set up to get some writing done; is coffee/caffeine on your Must Have list before working? Do you have a ritual? Favorite writing spot?

S.M.: I used to have a luxurious writing ritual involving a snifter of brandy, lingerie, and mood music. (Really.) Now that I'm a mom, it's more like guerilla warfare. I write whenever the Helpful Baby is distracted by his feet for more than five seconds. It's harder, because I can't get In the Mood anymore, but it really makes me value my occasional free time. Procrastination is at an all time low in my writing life. I just don't have time for it.

Lynn: We've all answered the question, "If you could talk to any writer, alive or dead, who would it be?" Is there a particular writer (or other famous person) that you'd like to have tossed out on their ear?

S.M.: Ooh. I can think of a few modern writers I wouldn't mind tossing into the fires of Mount Doom, but I have a personal rule against speaking ill of living writers. Instead, I'd like to sacrifice Oscar Wilde. I think he sat around making up pretentious quotes and then cobble them into "stories." I love the guy, but he was a hack.

Lynn: Have you ever done something specifically to "get book fodder?" Tell me about it.

S.M.: I refused to evacuate when I had an insane forest fire practically at my back door. I was entranced by the snowing ash and the bloody hue of the remaining sunlight. The whole side of the mountain glowed with smoldering trees. It was the closest to apocalypse I've ever seen. So horribly dangerous, but so moving and inspirational. Of course, I was younger and much stupider at the time.

Lynn: When did you first decide you wanted to write? What inspired you?

S.M.: I realized writing was my Destiny when I wrote my proto-feminist vision of X-Men (titled "Z Women") in second grade. It was basically terrible fanfic that expressed my irritation at the comics seeming to favor the male mutants over the female mutants. Not much has changed, really.

Lynn: What are some of your favorite books? Anything you'd particularly recommend?

S.M.: I have a million favorite books. Since I've gotten into reading indie books, I have even more, since I feel like I need to advocate for these amazing, underrated novels. I've recently loved "An Apple For Zoe" by Thomas Amo, "Descended by Blood" by Angeline Kace, and "Found in Blood" by Maurice Lawless. (Everything is "blood," isn't it? Haha!)

Lynn: Do you have any word or grammar pet peeves?

S.M.: I'm nutty about commas. My old critique group used to call me the "comma cowgirl." They're so easy to mix up, and they seem to be one of the most frequent errors in a fledgling writer's manuscript. I also get pretty weird about adjectives.

Lynn: 19 Dragons reads like prose, but occasionally the story slips into a poetry, with staggered sentences and blank spaces. I found it intriguing. Without giving away too much of the story, what made you decide to work in this technique?

S.M.: I'd love to say that The 19 Dragons was a masterfully calculated work of art, but I actually had no idea what it was about or where it was going until the end. I had to go back and do a lot of tweaking for consistency because I was really, really pantsing it on that one. The occasional "poetry" pieces appeared on their own. Total accident.

Lynn: Any upcoming new projects we should be on the look-out for?

S.M.: Actually, I have quite a lot coming up. My next appearance will be in an anthology called "Here Be Monsters." The sequel to "Six Moon Summer," called "All Hallows Moon," is coming this fall. I'm also organizing a charity anthology to benefit St. Jude Children's Research Hospital that will be released in December. Hard to believe I wasn't publishing anything a year ago, whereas I'll have five publications in 2011!

Lynn: Well, thanks for your time, and good luck! I know I've enjoyed getting a peek into your head!