SyFy Presents: A Line In the Ice 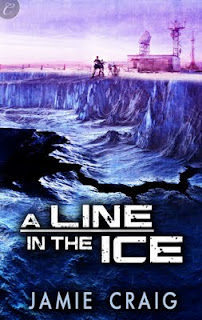 Cast: (in order by appearance)

Summary: The Antarctic. Cold. Alien. Uninhabited. Until now. Strange creatures are appearing from a rift in the ice. An elite military squad stands between civilization and the mysterious invasion of monsters. Out in the ice one mistake is the difference between life and death. Charlie Weller (Day) thinks she’s seen everything—until a man crawls out onto the ice, barely alive and muttering about a place called Illyria.

Made Up Magazine recently got an exclusive interview with the director, Lynn Townsend.

MUM: So what made you decide to get on board with this project?

LT: Well, I read the book - you know I pitched the idea to Craig Engler in the first place - and I thought, what a great piece for SyFy. I mean, it's a really great story; and with such a small cast and confining location - the entire movie except for the last fifteen minutes - takes place in a tiny military base in the antarctic, it's perfect. SyFy does some excellent work, but they honestly just don't have the big budget... And this story is really character driven. That's why I was honestly thrilled to get to work with some of the best genre actors.

MUM: What was it like to work with Felica Day (Red: Werewolf Hunter; Eureka; Dr. Horrible's Sing Along Blog)?

LT: Oh, she's just a perfect Charlie. I mean, have you seen her? I know she does the quirky nerd frequently, but that girl is just SPUNKY. She literally rescued Wil Wheaten at Comic Con from some rabid sci fi fans, and you know they're the scariest things out there... So when I saw this role, I knew she was a perfect fit.

MUM: What was the worst thing about the set?

LT: Well, we had to use some leftover pieces of the Hoth stage for it - and let me tell you, getting through to Lucas is an exercise in red tape. The man has social secretaries for his social secretaries. And then it wasn't even put together right. We had several incidents on the set where the roof would literally collapse. And the Makeup Director used to grab his Darth Vader mask and stalk through the rubble. Funny, yes, but we lost at least a half day of filming.

MUM: So, who do you think really nailed their role?

LT: I admit, I was a bit dubious about working with Leah Gibson; anyone who's been on the set of Twilight is bound to be just a little flakey; but she was great. We had our moments, but really, she was quite good. And Michael Shanks... he's always throwing himself into his character, really heart and soul. Honestly, honestly, they're all excellent, and they really put a lot of work into this piece. I think viewers will be impressed.

MUM: Well, that's all we have time for today: Make sure to check out A Line in the Ice, a new SyFy original mini-series, set to air in December. Ooooh, I get chills, just thinking about it.

Please vote for my blog in the traffic-breaker poll for this tour. The blogger with the most votes wins a free promotional twitterview and a special winner’s badge. I want that to be me! You can vote in the poll by visiting the official Line in the Ice blog tour page and scrolling all the way to the bottom.