A few months back, I saw this Call for Submissions. (as a note, I hear that Sommer may be extending the deadline - oooh, punny! - a bit. If you're interested, keep an eye on the call and if she doesn't make her word count for the collection...) and then I saw this... 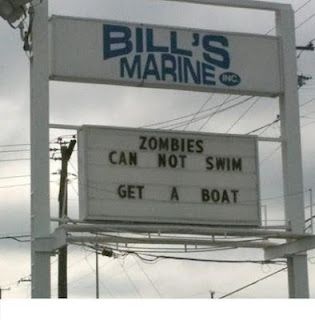 And I had a wonderful idea for a story. If you've read much of my work, you'll know I have a bit of a location fetish. This probably has to do with the fact that I rarely leave the house. So, my couples have a tendency to get it on in airships, on catwalks, on firetrucks, under bridges, in cars... so, wouldn't it be fun to have sex on a boat?

The story pretty much wrote itself at that point.

Except that it had to have zombies in it, right? Which means if my heroine isn't one of those wimpy sorts who has to be saved all the time, she needs to be able to use a firearm.

And for reasons I don't really want to get into, I hate guns. It's a long-standing prejudice left over from a traumatic event. And then I read this story line (particularly, this strip) from Something Positive. (as a note, the artist was doing something weird when this story got posted, and it's not in order... sorry about that... but you should be reading Something Positive anyway...)

Maybe it was time for me to examine my fears. (Back in college, when we had to do that trust issue thing - you know, falling backward off the bleachers and letting your classmates catch you? Ug. I was sobbing before I could do that. No, I don't trust you not to drop me. Asshole. In retrospect, I probably just should have failed the class.)

I have a few friends that are gun-bunnies, so I sent my friend a text, "Think you could teach me to shoot?"

Needless to say, she was extremely enthused. She also has an impressive collection of guns. (Weird fact*: While only about 45% of the population owns a gun, most gun owners have between three and nine guns... which is to say there are enough guns in the US for every man, woman, and child to have at least two.) But I can believe that. Brenda brought four guns with her, and I know she has more than that.

We discussed logistics and set a date; Tuesday afternoon. She picked a range over in our area because her range closes at 6pm on weekdays. I suppose we could have gone out on the weekend, but I think doing it on a weekday was better. Fewer people.

She sent me the info on the range - I had to read some safety rules in preparation to get a range card. I think this is a grand idea. I personally don't want to be shot by accident while at the range. My husband says the rules all pretty much boil down to "Don't be a douche canoe." Keep firearms with the action clear when not in use. Point all firearms downrange at all times; loaded or otherwise. Fire only at your own target, not at the floor, ceiling, or someone else's target. Sweep up your brass. Use eye and ear protection at all times. No eating, drinking, smoking, spitting, or taking pictures. (Shit. I love being able to document things...)

I had to ask for clarification on a number of these things, since I had no idea what they meant. There were a lot of other rules for specific types of weapons - rifles, automatics, etc. I hoped the "test" wouldn't include any of this, because there was no way in hell I was going to remember anything.

When we got there, it was relatively uncrowded. I could hear gunfire, even outside. On the occasion when it wasn't drowned out by jet noise from Oceana, that is. So, Brenda arrives with her duffle bag of guns... We go in and she tells us another gentleman will probably be joining us. My husband knows Brent from work - neither Brenda nor Brent work for my husband's employer any longer, but they used to.... anyway....

So, interesting fact. At gun range considers any women with men to be "escorted" and therefore we get free use of the range. (It's $15 per person for men, or women arriving alone...) Ladies night at the gun club, how adorable.

They had a variety of paper targets for sale - the standard round bullseye, a variety of Humanoid ones, and some interesting themed ones, like this: 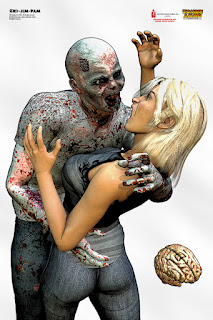 I entertained myself with the idea of buying a zombie target; after all, this whole firing a handgun is supposed to be about research, right? and then decided I wasn't comfortable yet with the idea of shooting a humanoid target.

So, we head into the range; booth 2, lane 12. I was still messing with my ear protectors when we entered the booth so I got an earful of what a firearm actually sounds like. Ow. LOUD. Take everything you think you know about how loud a firearm is supposed to be +more NOISE. Wow. Trust me, I got my ear protectors on quickly.

Brenda unloaded her bag and placed four handguns on the counter. We loaded magazines and she told me about the different guns. This button pushes the slide in place. This unloads the magazine. This is the thumb safety. Line these three green dots up and then squeeze the trigger. Remember to breathe. Don't think about it too much.

I watched her fire several shots and then she laid the gun down on the counter for me.

I took up the gun, got my feet settled, lined up the sites. And fired. (Unseen by me, Brenda was apparently behind me for the first shot with her hands out, in case I wasn't braced well enough. I'd been expecting a lot of recoil. In movies, if they're not completely ignoring recoil, they show some dippy girl firing a gun and going flailing backward into a pile of books or something. So I had my feet spread and was braced for it... but it wasn't as bad as I was expecting. And no, I didn't stagger backward.)

I fired off four shots, dislodged the magazine and stepped back. The husband took a turn (after a refresher explanation - he used to shoot a lot with a friend of his back before we were married, but the friend and I didn't get along because of my feelings about firearms, and the husband hasn't been shooting since we started dating.) and then Brent took a turn.

That first target came back full of holes; we'd all made a run at it. So we labeled the next one, I fired another 8 rounds into this target. The husband took a turn with the .40 caliber. Then Brent, then Brenda. And then we moved to a smaller gun; the one Brenda carries, the .330. I liked that one a little better; the trigger was a little harder to pull, but it seemed easier for me to get the shot lined up. 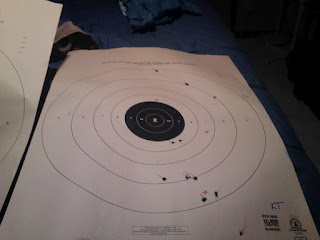 I didn't put a single shot "in the black", but I did hit the paper every time I fired, so for a beginner, that's pretty good.

I discovered something I'd heard before, but never experienced. Shell casings - called "brass" - are hot. They eject out of the gun forcefully, usually bounced off the wall and hit the floor, but from time to time, one of them would hit me, or the other people in my party. I got one down the front of my shirt and stuck in my bra - something Brenda found hilarious because it happens to her all the time. The husband managed to get one down the back of his collared shirt AND t-shirt, and had to untuck his t-shirt to get it out. He's actually got a crescent-shaped burn on his neck. (whereas apparently my experience with candle wax on the boobs prevented me from being more than just slightly annoyed).

In total, I fired ~20 rounds with two different guns.

The husband, I think, was hoping I'd be more enthused.

"What did you think?"

I'm slightly exasperated about this. I know he's "manning up" as he says it, about the roller coasters (he's afraid of heights.) and going on the Loch Ness with me and the kiddo. And I appreciate it. But he won't go on any of the Big Kids coasters with me, just the ones that the kiddo can do. He's probably got another year before she'll be tall enough to hit Alpengeist or Apollo's Chariot, and maybe three before she's tall enough for Gryffon. So, you know, he's trying. But he's not jumping up and down and excited to get on a coaster, and I know, honestly, that he'd rather still not do it.

So, I went. I shot. I wouldn't be adverse to doing it again.

But I'm not ready to buy a gun.


* Fact meaning what information I can find, and that's still highly slanted and politically charged, even just for finding out information! I'm not going to post links to all the sites I looked at. You can do that info gathering yourself. I collated a LOT of data to get those figures and I'm certainly not sure it's correct.
Posted by Lynn at 10:27 AM