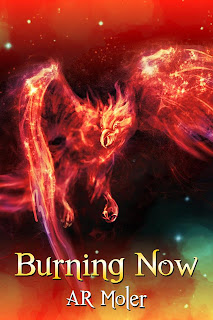 One of the best things about being a writer is the community. I have tons of weird, crazy friends who are just as weird, wonderful and perverted as I am.

One of them is AR Moler, who I've "done coffee" with a few times and our children are close in age and share a frightening Pokemon obsession.

Her new book, Burning Now, just came out from Torquere Press, so you should check that out.

Time. I have “real” part-time job, and I homeschool my kids, so writing gets sandwiched in in weird slots and chunks (like when I have to park my behind for 2 hrs beside the pool while my kids have swim team practice).

I’ve been writing since middle school (back when the dinosaurs roamed the earth). It was mini-mysteries and fan fic stuff back then. I wrote all through college and even traded some stories with friends.

The most direct insertion was being told by an orthopedic surgeon that I was fat and old and needed to learn to live with the pain (when in fact she missed my MCL tear on the MRI completely). I used it almost verbatim in a story with an smart awesome ortho, where he is interviewing a dr for a job. Needless to say that doc failed miserably.  (I told the real one to take a hike too.)

I confess to having characters express MY opinions frequently. People I know? Enh, not often.

I have a shifter piece called Burning Now.

Gideon lifted Vanya's hand. "What happened to your finger?" He gestured toward the Band-Aid around Vanya's index finger.

Gideon sucked on the next finger over.

It was a toss-up as to whether it was the wet heat of Gideon's mouth or the rub of his thumb across the skin on the inside of Vanya's wrist that was a biggest turn on. Vanya drew in an uneven breath.

"We could pick up where we left off yesterday," Gideon suggested.

Vanya was silent, having an internal argument. Was it priznanye or not? What if it was his dick doing the talking and the rest was just his imagination? Did it matter?

"That I wanted to get naked and horizontal? I do. I really do. I just... I like you, and I don't want to give you the impression that I'll bend over for anyone who asks. Fuck, I sound like some teenager girl about to give up her virginity." Vanya stood up, picked up the plates and carried them to the sink. Lord, he was screwing this up big time.

Gideon crossed the kitchen and stopped behind Vanya. He spun Vanya around slowly and stood with a hand braced on the sink, bodies almost touching. "I get it. There's a weirdly scary level of chemistry between you and me. Something that goes way past looking for a casual fuck. I wish somebody could explain why I want to tear your clothes off and do you against the nearest wall and at the same time it bothers me that you cut your finger." His hand touched Vanya's cheek.

"It's priznanye," whispered Vanya. It had to be. There was no other sane explanation.

Gideon frowned. "Your people? I understand there's cultural differences between us, but..."

"Take a step back. I'll show you," Vanya said. What the hell was he doing? He'd never changed in front of someone who wasn't zhar-ptitsa, never even been tempted, but somehow it seemed crucial that he show Gideon how different he was. Either the guy would run screaming out of the apartment or they'd come to some sort of understanding.

Taking a couple of steps back, Gideon eyed him dubiously.

Vanya pulled off his t-shirt  and dropped it on the floor then he willed the change.


Is there a character or story that's stuck in your head and won't leave, from either your work or someone else's?
“A” character? How ‘bout the whole troop of them that wake me up at 3 am and insist they need to visited again.  Some characters get used for 1 story to probably never be seen again, others… just do not go away.

Time Enough for Love by Robert Heinlein, The Amber series by Roger Zelazny, Hyperspace by Michio Kaku (not a novel – quantum mechanics)

I ride a motorcycle.
I teach chemistry to college students.
I periodically do contract costuming for people (medieval / Jedi /anime /Star Trek etc)