25 Days of CHBB, What Does the Fox Say version

UPDATE!
I have decided to go ahead and give this ornament away! If you want it, please comment here, "like" my facebook page, or follow me on Twitter. I will give bonus three entries if you go to Amazon, buy Pistols & Guns, (my cowboy short story) and email me your order number... (If you've already ordered, liked, followed and are otherwise adorable and wonderful, just let me know in an email and we'll get you some entries for being FAN-tastic.) 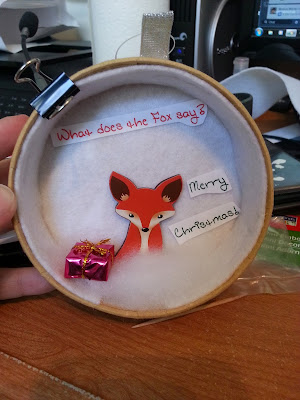 So yeah, the fox doesn't have anything to do with anything, but I like the picture... Also, I've been making these diorama ornaments for the last several days, which is fun, kinda artsy and involves no actual talent on my part whatsoever. Last year I thought I'd try to teach myself to crochet this year... yeah, like that happened. I did ACTUALLY go to a class and sort of maybe a little bit learned how to crochet a straight line, but that was totally it. Also, I found it insanely boring.... further, my best friend - recently divorced, so had all the sudden a LOT of free time on her hands - took up crocheting again... she already knew how to do it, and was just applying it to weird-geeky-art... after seeing this 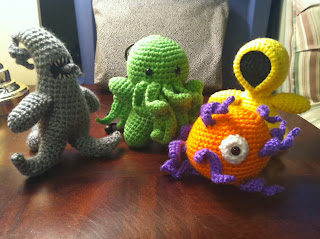 that I decided Flying Spaghetti Monster did NOT want me to learn to crochet, because I would only embarrass myself.

So, I've been making these little dioramas, and really, really enjoying it.

(Also, yes, I have a weird "thing" for the What Does the Fox Say song. Don't ask... I really don't understand it myself.)

And in between all that, I've been busting my buns to finish my novel, Blues, which is the sequel to my upcoming Torquere publication, Roll, available end of February 2014. And writing a short story for another friend's multimedia publishing endeavor. Once I'm done with those two projects, I'll start work on Howling Bitch, the sequel to my upcoming Vamptasy novel, Blood Sight, available in March 2014.

Which would be part of the reason why I'm getting Boston Market to do my Christmas dinner this year....

I'll be here all day; why not talk to me about what you're doing for Christmas (if you celebrate it, religiously, secularly, or if you're Grinching it up, or not Christian - or American, since it seems like as an American, you get kinda inundated with Christmas regardless... personally, I'm a Gravitational Absolutist...)

(If you really like my silly fox ornament and enough people ask, maaaaaybe I'll give one away.... say "What does the fox want for Christmas" in the comments...)