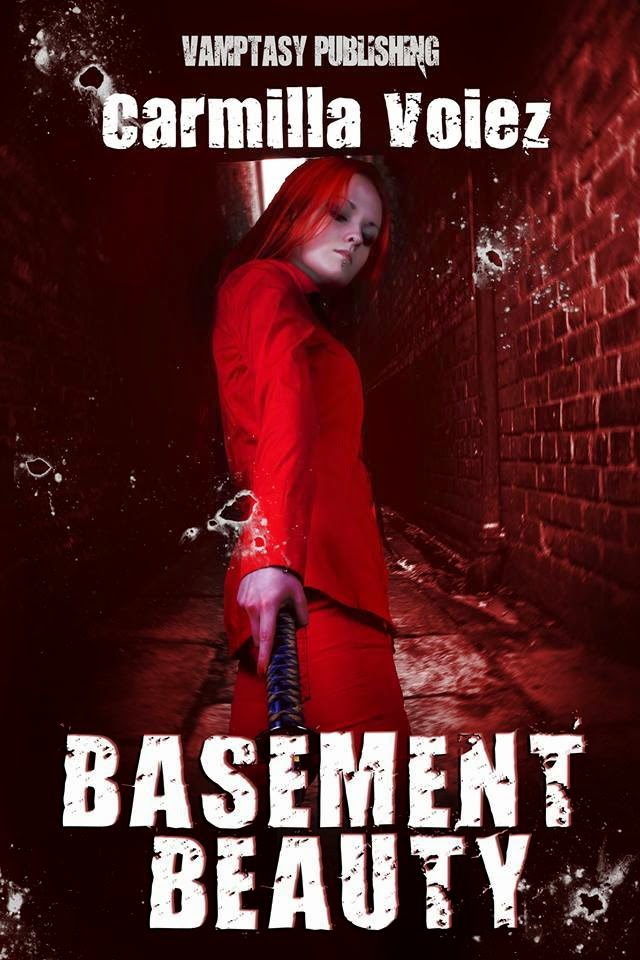 "Carmilla Voiez is more of a singer than a writer. She tells her compelling story in a hypnotic, distinctive voice that brings her eerie world vividly to life." Graham Masterton

While her imagery harks back to the writings of Clive Barker and H P Lovecraft, her voice is uniquely female. Starblood was, perhaps, the first true female horror story ever written, dealing with both sexual violence and the struggle of a woman trying to make sense of a senseless world.

Basement Beauty leaves the Crowleyesque world of magic and demons behind and takes us to the city of Glasgow where a serial killer leaves a trail of victims like statues, while a group of assassins hunt for a rogue vampire who is kidnapping human women for his own perverted pleasure. In the midst of this Amalthea and her friends try to scratch a living while negotiating their way through everyday sexism and violence. Basement Beauty is being unleashed on Friday 13th June and there will be a radio show and a Facebook based party to celebrate this, followed by an interview with the author on Zombiepalooza radio.

Carmilla grew up on a varied diet of horror. Her earliest influences as a teenage reader were Graham Masterton, Brian Lumley and Clive Barker mixed with the romance of Hammer Horror and the visceral violence of the first wave of video nasties. Fascinated by the Goth aesthetic and enchanted by threnodies of eighties Goth and post-punk music she evolved into the creature of darkness we find today.

Living in North East Scotland, she finds inspiration in the wildlife, castles and desolate places which surround her. She lives with her two children by the sea.

Her books are both extraordinarily personal and universally challenging. As Jef Withonef of Houston Press once said - "You do not read her books, you survive them."

Signed to Vamptasy Publishing in 2012 three books in the critically acclaimed Starblood Trilogy have been published both as stand-alone novels and as a complete trilogy and she is currently working on an erotic-horror anthology called “Bloody Sexy” and a graphic novel of the first book in the Starblood series. She has also edited and compiled a collection of psychological horror from the best new talent in the world of horror writing "Broken Mirrors, Fractured Minds". Carmilla Voiez is a name to watch.


You can find Carmilla's full bibliography at Amazon – http://smarturl.it/CarmillaOnAmazon
her blog can be found at http://carmillavoiez.wordpress.com
and her Facebook page is at https://www.facebook.com/Author.Carmilla.Voiez
to find out more about Basment Beauty check out http://smarturl.it/BasementBeauty

Amalthea stood outside the unlit entrance to “The Pit” and breathed in the cool, pre-dawn air. One hand brushed wild curls from her mouth and tucked them behind her ear. They sprang back across her cheek immediately, untameable.

As her skin acclimatised she drew jacket sleeves over her rich, honey-coloured arms. It was her post-work ritual: the time when she metamorphosed from a human doing into a human being.

A movement at the edge of her vision attracted her attention and she turned towards the shadowy alley where the night club bins were stored. Her direct gaze didn’t reveal any ghoul, goblin, animal or person skulking in the darkness, watching and waiting for her to leave, but her mind created a sinister shape anyway. For the past six weeks the evening news had continually hinted at unnatural deaths city-wide and rumours of a modern day Jack the Ripper were rife. Now every alleyway had become hostile territory and every shadow a killer, preparing to strike.

With her meditative moments, of simply being, stolen by fear of the impenetrable darkness, Amalthea decided to button her coat and get moving. Home wasn’t far away, a mere ten minute walk and at four am most of the drunks were already home, sleeping it off, or standing, unsteadily in taxi queues, waiting for chariots to return them safely to their beds. In fact, that was one thing that could be said about fear of the dark - it was good for the economy.

Some questions and answers -

Could you tell the readers a little bit about yourself?

I am a Goth, a horror writer and an all-round nut-case. I live in Scotland with my kids and cats and write horror stories from a female point of view, merrily turning tropes on their head and fucking with the gender binary one paragraph at a time. Well it keeps me happy.

Who are some of your favourite authors?

What’s the most important lesson you have learned about writing?

To let the creativity flow unhindered when writing the first draft of anything and worry about editing it later.


What aspects of writing to do you find the most difficult?

I love editing, but I find it very difficult to know when a story is as perfect as it’s going to be. I tend to hold onto them for a while, waiting for the perfect sentence structure to surface.