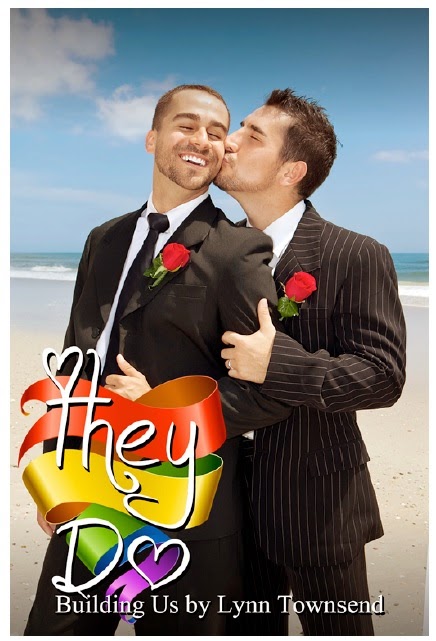 There's nothing like a wedding to make things interesting, for the grooms, the wedding party, the family, the friends, and even the caterer!

Sean Michael's Hammer Club favorites Billy and Montana are back in "Put a Ring On It", a tale that begins with the celebration of their best friends' first anniversary. In "Building Us," by Lynn Townsend, Eric and Temple discover that, for want of a nail, a ring is lost. In "Hold Your Peace" by Lazuli Jones, Terrence's best friend (and best man) Michael makes a confession hours before Terrence's wedding. In "Tony's Tiara" by Berengaria Brown, Tony's sister's wedding is a neverending saga of disasters, but Josh is there to support Tony through them all.

In "Having His Cake" by Genna Donaghy, Matty Strauss is about to cater the biggest wedding in his career, but the last thing he expects is for the groom to be his former one night stand. In "Always a Groomsman" by M. Durango, best men Doug and Garth have to keep a wedding-day disaster at bay. In "Lake Effect" by Erin McRae and Racheline Maltese, Kyle and Daniel return to their hometown to get married only to find themselves facing an obstacle course of family drama and small-town misadventure in their quest to make it down the aisle.

As a construction foreman, Eric knows how to build a house. What he's uncertain of is how to build a life, now that he's finally found the man he wants to spend his with. Temple, a university professor with a stack of erudite publications as long as his arm has always played the single's game, until he meets Eric.
Will a roof-top proposal lead to “I do” or will the whole thing fall apart when Eric can't put a ring on it?

Torquere Specials for this week only

Need to catch up on a short story or novel that I've written? Right now Torquere is running a special on Roll and Blood Cries Up for 20% off normal price. Still not enough of a discount for you? Add the June special code "PRIDE" to save an additional 20%.

PRIDE code applies to any Torquere novels and short stories (including the They Do collection and Building Us!) throughout the month of June. Roll and Blood Cries Up on sale this week only.

(I suggest you use the PRIDE code and buy the entire collection; if you haven't added Sean Michael to your reading list, you don't know what you're missing... )

I wrote Home Inspection originally last year. Liz and I did a challenge where we each wrote one short story per week for six months. When we finished, we collected the best of these and published them with JMS Books in Whetting the Appetite.

It may or may not have been inspired by my very sexy next door neighbor. (I get some great scenery around here and I'm not just talking about the swamp...) I went outside one day and he was painting his door. Which would have been fine, except he was doing it wearing a pair of boxer-briefs and an open button down shirt. So, it was fine+.

The finished product (Home Inspection) didn't really turn out how I originally anticipated - which is actually okay, because I ended up later that year writing Full Frontal Neighbor (which will be out in September in the Sexy Librarian's Big Book of Erotica) that deals a little more with accidentally getting an eyeful of a sexy neighbor and I don't want to copy myself too much.

Given the nature of the challenge that Liz and I did (we were supposed to write micro-shorts, less than 1,000 words each) I wasn't able to delve into Temple and Eric's relationship as much as I would have liked. It was also one of the very first stories I wrote for that challenge... and I spent the rest of the six months trying not to yank it out of the collection, expand on it, and submit it elsewhere. It's not the only story that went like that, Liz's Zach's Man is one of the best things she's ever written... in my opinion.

But we persevered. And the collection is lovely. (you should buy it!)

Still, I kept coming back to Eric and Temple. I like mismatched couples; Temple is a university professor. Intelligent, educated, posh. He's also rather wealthy. Eric is a roofer. Brawny, tall, good at his job, and smart, but not witty. Not to mention that they're from racially diverse backgrounds.

I wanted to do something else with them; what would their families think (mixed race couples often have a hard time to start with, adding homosexuality into the mix!) and how would they manage a relationship with so very little common ground?

When I saw the call for They Do, I thought - well, that'll be a good way to have a further look at them... I certainly didn't have time for another full novel (altho I will admit that they probably deserve one!)

Email ThisBlogThis!Share to TwitterShare to FacebookShare to Pinterest
Labels: Building Us, M/M erotica, new release, They Do, Torquere Press