Heat Wave: Burlington is out...

For this week, only, at the publisher for 30% off list price. It will be available through Amazon, Barnes and Nobles, and other e-book sellers (Smashwords, All Romance, etc) starting next week. 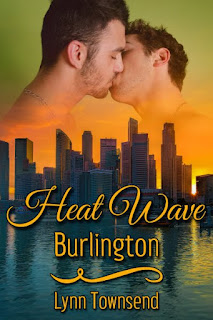 Brandon Russo can't stand the sight of blood and the current heat wave makes doing almost anything outdoors unpleasant. So when an SUV sideswipes a bicycle right at the gate of the storage facility in Burlington, Vermont, where Brandon works for his aunt, he considers just locking himself in the office and calling 911. But he's rewarded for letting his good nature overcome his squeamishness when the man he rescues from the ditch turns out to be absolutely gorgeous.

Scott Seay is a photographer on the trail of a legend. A strong lead has brought him to Vermont for the auction of a storage unit whose owner had been obsessed with Champy, the creature rumored to live in the depths of Lake Champlain. When Scott winds up in a ditch outside that very same storage facility, being rescued by a hot, chivalrous man who literally sweeps Scott into his arms ... well, Scott's always believed in fate.

Brandon woke up with the disconcerting feeling of having no idea where he was or why he was so aroused. His cock pressed urgently against too-tight jeans and his heart rate was so rapid, he could feel each beat in his eyeballs. A warm body -- too warm, really -- pressed against his, and an arm was draped over his hips, fingers dangling against his belly.

His mouth was sticky; he’d gone to bed without brushing his teeth. He ran his tongue around in his mouth for a bit, working up some spit, trying to remember the events of the day that led to having what was quite obviously a man in his bed. He squirmed just a bit, rubbing against the person spooned up against him. The person made a breathy sort of sigh, shifted a little, and Brandon could feel the hard length of his bed-guest’s cock against his butt cheek.

Why was it so dark? Usually the street light just outside Brandon’s window lit his bedroom with an annoying, amber-yellow glow. Right. He wasn’t in his bed. He was in Scott’s hotel room. The day’s events returned, a little muzzy, but he sorted them out painfully, his brain completely sleep-muddled. He wasn’t sure why he was sleeping with Scott’s arm around him, although he had to admit, uncomfortable erection or not, he didn’t mind having Scott’s arm around him. But it wasn’t like him to forget having sex, and he was pretty sure they hadn’t. So why was he ...

Crap. He must have fallen asleep while watching television. Which meant he was currently hogging Scott’s bed without being invited into it in the first place. Unease settled like a cold rock in his belly. Like Scott hadn’t had a bad enough day without trying to sleep around a bed hog.

Brandon squirmed, trying to move out from under Scott’s arm. Least he could do was sleep on the room’s tiny sofa if he couldn’t find his keys in the dark without waking Scott. Every movement was torture, waking himself further and feeling the lean length of Scott’s body against him. To be honest, he didn’t really want to go. He wanted to turn in that heated embrace and kiss Scott awake.

“Sorry I woke you,” Brandon said. “I’ll head on home and let you get some sleep.”

Scott snuggled closer. “Look, I know I’m really bad with the flirting thing. I don’t get loads of practice. But I did invite you up to my room. I ... if you want ... I’d like you to stay.”


Aaaand, I got another book cover in my email box.... 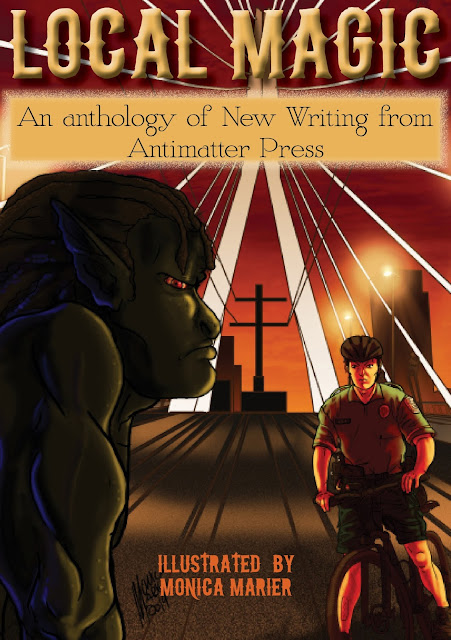 This collection will be available for a limited time only and I'm told it will be for sale "soon."

Antimatter Press is not, however, keeping its doors open. All remaining contracts have been returned, and this book will be the last publication. I'm not quite sure when it will be out, but I'll let you know as soon as it is.

My story in this collection is called "Living Proof" and is about ghosts who wonder what happens before death... an interesting twist on the ghost hunter concepts. I think you'll enjoy it.

It is not, however, my usual, nor is it a romance at all, but just a straight up spec-fic story.