You mean apart from 'writing'? ;) I do find the act of writing itself a challenge, making myself do the work of getting my stories onto the page rather than just letting them sit in my head where they can remain perfectly formed without having to risk failing to get it right for someone else to understand. That I suppose is the creative challenge. The more practical challenge is navigating my way through the publishing landscape. When I was thinking about being a writer, this was a long time before the eBook boom, so my head is in many ways geared to thinking about publishing in those terms, especially with regards to promotion, distribution, etc. Now a writer can have so much more control and involvement in not just the writing but the production and release of their work, that it can be a bit intimidating and mind-boggling. But I think I'm up to the challenge.

I've always been making up stories in my head, acting them out when I was younger (and able to get away with it!) but it never occurred to me to be a writer as  'thing' you could do until I was 11 or so, and I wrote a story for a school assignment. My teacher wrote that it was one of the best she'd ever read by a student, and that set the wheels in motion.

I'm incredibly proud of Body & Bow (which I'm promoting here today), but I'm also very fond of two short stories, one which is an m/m story called 'Storms of Ancient Gods', inspired by Slavic mythology published in Erotica Apocrypha (which is unfortunately no longer available as the publisher shut down) and I'm also still very happy with 'Ripe Fruit'.

I like 'Storms' because it pushed me to go darker than I had written before, and 'Ripe Fruit' feels, to me, amongst the most 'real' of the stories I've done, and the writing still feels good even after writing a while ago.

Yes! I see an older work and wince at how I've written sentences and know that I'd do it so differently now and just wish I'd known then what I know now... the usual kind of quite useless beating onself up, rather than accepting that it's all part of a learning process, and really, if it was so bad, they wouldn't have accepted it in the first place.

Sometimes a name just comes to me and feels perfect and I go with it - sometimes even an unusual name will inspire the story in the first place! Beyond that, if I'm looking for names, I head for a baby name website and look for ones based on meaning, and choose one for what I feel is important about the character, in terms of their personality or role in the story.

In the case of Body & Bow, I can't quite remember whose name came first of the cello/violin duo - I think Leonard, which then made think of lions, which itself became a small theme in the novella as Leonard gets called 'the lion of the cello.' It made sense then for Marco to be named thus, as Saint Mark's symbol is the lion (which in turn is why Marco is Venetian). Klarissa Archer came from two definitions: 'clear, bright' (Klarissa - which even sounds a little like 'clarity'), while archer should be obvious, so she is a music critic who writes like an archer taking clear aim.

Not so much. Little aspects creep in - observations I've made to myself for instance. I've started though writing more stories based on places I've actually been, which I think helps adds a sense of location and setting. I will say that I have used people I know or have met, at the very least for a visual reference, for my writing, but not their personalities or character traits as much.

Other projects include a m/m novel featuring a doctor and a cage fighter, and my usual crop of short stories that are on the boil. Here is an excerpt of another ménage story that I'm yet to finish:

The first time we met Eric, Harry and I both wanted to fuck him.

Really, how could we not? Slip of a thing with milky skin, all of 19 years, a head of blue-black loose curls, and big saucer eyes that stared at us as we passed him in the halls of residence, Harry's hand draped across my hip, my hand bag on his other arm. The outward appearance of the perfect gentleman.

Harry and I had managed to tweak the room draw system well enough so we had rooms right next to each other, with the one to the right of mine empty for a first year. At first, Harry had rolled his eyes, fearing some annoyingly perky kid with grand ambitions and the desire to make their mark at our university, and, heaven forbid, the world. Such...naive hope for the future.
But when Eric arrived at his room, carrying a box almost larger than himself, teetering this way and that, his expression nervous but determined, so deliciously sincere, Harry and I, arms around each other in my door way, decided on just a shared look that we'd both have him.

Luckily for us, we also rather enjoyed sharing.


Tell us three things about you that are interesting.

* When I'm not writing or at the day job one of the things I can be found teaching or doing is Scottish Country Dancing.

* In 2009, I left Australia and moved to Cambridge, UK without a job or a place to live lined up. I picked Cambridge because I wanted to keep doing university administration, and also I'd been living on Cambridge Street for two years in Sydney.

* I have lived in several very different places in my life; the teeming city Jakarta, a small coastal city on the east coast of Australia, and the university town of Cambridge.

Blurb and where to buy

Upon reading Klarissa Archer’s scathing review of their latest performance, cellist Leonard Sanderson and violinist Marco Lambrosini have very different reactions. Leonard is filled with rage. Marco invites Klarissa for drinks. Pleased that she has so upset the arrogant Sanderson Klarissa accepts Marco’s offer, unaware that he has something in mind for her, Leonard, velvet ropes and the bows of cello and violin. (M/F/M)
Body & Bow can be bought from Forbidden Fiction 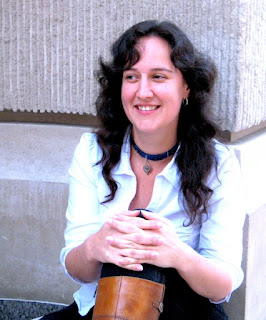