I met Nick quite a few years ago, now. And when I met him, he was the darling of my local gay community... (I say that like that meant more than two or three guys at a given time, but hey...) 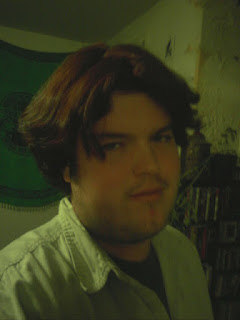 Everybody loved him. And I heard about him long before we ever actually met. One of my friends harbored an enormous crush on him and complained bitterly about Nick's boyfriend up in Buffalo. Enough so that - because I especially have a lot of trouble remembering people's names when I don't have a face to match them to, I'd started referring to him as "Tramp."

By the time we finally met, I'd heard so much about him that I fully expected him to be this knock over gorgeous, witty, wonderful guy. (Not!)

Except that, oddly enough, he really was.

He was adorable, friendly, brilliantly intellectual without being a total snot about it (ok, really, I know more snotty intellects than really, any three women should have to put up with...) and above all, kind.

Nick has shown me a couple of pieces of his work. Let me say right now that he is freaking. Brilliant. Just really. He wrote a terrible, wonderful story that I saw; written second person, present tense, completely emo, two characters talking and nothing happens... Satire, you understand, of that kind of work... and as I was saying to my husband last night - the very best satire isn't being completely impolite and nasty and saying "oh it was only a joke..." The very best satire manages to tell a damn decent story even if the joke itself goes flying over your head.

Last summer, me, Elizabeth, Nick, and several other friends are sitting around discussing writing stuff and erotica and LGBT friendly publishers and I got a burr up my butt about Nick's story Alabaster. "You should totally publish that. It's really good." Liz hadn't even read it, but based on my recommendation and Nick's surprisingly eloquent spoken 'blub summing up the story (how the hell does he do THAT? takes me forever to come up with a 'blurb...) she and I both started pushing him to publish. In fact, we nagged and badgered him so much that he rolled his eyes at us and sent the story in that night, without any additional changes. It was... maybe two weeks before it got picked up...

Time.  I'm a grad student, and that eats up the vast majority of my time. Also, brain-slide: that effect of the mind where you sit down to write and suddenly have a deep desire to clean out the refrigerator, check your email, or call that friend you haven't spoken with in a couple years.

I contend that I was born this way was born this way.  That aside, I think it was my grandmother who, when I was in fourth grade, responded to me making fun of the bad writing in a story (I don't even remember which one now) by challenging me to rewrite it how I would have it.  She's a sly one, my grandmother.

I despise substituting numbers for words and letters. I understand on an older model phone, much like the telegram, it's economical to use deep shorthand, but if you aren't being chased by assassins and time isn't running out and your message isn't one of national security, use full words and maybe some punctuation.

My biggest flaw is my love affair with the semi-colon. It's a handy little device for the sort of stream-of-consciousness style I tend to use, but sometimes I'll go back and realize it looks like I've been rewriting the preamble of the Constitution, even in quick texts and status updates.

(Note from the writer: Also, you're still using two spaces after a sentence. This is over and done with. Please stop! I'm having to edit this interview!!)

I like to pick names that are both thematically and culturally appropriate.  For example, in "Alabaster," my two principle characters are named Luke and Alan. Luke means light, Alan means stone. I literally do an internet search for these things if I don't already know them. For last names, I will look up culturally appropriate surnames that are also thematic, though in many cases I'll just use last names that I've encountered in real life, or derived from historical figures. It really depends on the story, and the balance between reality and mythology I'm trying to convey.

Bullying. I've changed the specificities, but the emotional sensation that I call up when I'm writing is absolutely coming from a place of experience.

A surprising amount, actually. Thought I never use a person whole cloth, the people in my stories tend to be composites of people I've know, snippets of conversations that I've had or overheard, sensations that I associate with one situation or another. As often as not, a character will represent more a kind of person than an actual individual.

I'm currently working on a story called "Hematite", which is a sort of spiritual sequel to "Alabaster" in that it is written with a similar worldview in mind and at a later time in life. "Alabaster" was a story about a boy's first time falling in love. "Hematite" will be a story about someone who has begun to mature, emotionally, but still lives in their head. It's also about being a queer goth kid in the late 90s, so somewhat autobiographical.  It's nowhere near done, but here's a snipped from my working draft:

You are a stranger, dancing in darkness with lavender lights flashing and smoke in the air and bass loud enough to shake the air in your lungs. You dance alone in a crowd of strange people, also dancing alone. Spiritual revelations ensue. It's soothing and sad, strangely quiet for all that; best taken with rum and coke and the smell of cloves in the air, no sense of future, liberation from the past. For the duration of this song, there is no such thing.

You dance like you're making love with your own soul, which for just this moment you clearly and unequivocally have, in turn a comfort and a terror. There are monsters hiding in these shadows, flitting here and there between spiraling stars, strobing within impossible rhythms, whispering behind the noise and slowly teasing your heart to pieces with lovingly sharpened talons. There are wings on your back, made of nothing more than shuddering air, verdant sound. There is a whole world dancing behind your eyes and under the surface your skin. There you are, embarrassment and pretense stripped away. You feel it with utmost sincerity down to the throbbing fibers and sinews of your being. You are something other than the sum of your body. You are more, here, than you are anywhere else. This is your sacrament; here is your church. It is full of pretense like any other church, but under the nail polish and moon boots and trench coat and lipstick is a sincere connection with the divine. These are your regalia, you are your own altar.

Then you notice him, another dancer, three feet away. Your eyes meet for less than a second, him smiling like he has a secret, and you are suddenly, unutterably self-conscious. Dear God, he's beautiful! Oh, no. No, no, no. You giddily realize, you just fell in love. This is a very bad idea...

Put on headphones, warn everyone not to come within strangling range, throw on a Pandora station that is suitable for the mood and hope no one bothers me. I like to write at night, just before bed, because 1) it's late and no one is likely to bother me and 2) my mind is more limber at the end of the day. I'll actually take breaks from homework to write fiction in brief snippets, because it's a welcome break to step away from my "heavy" reading and do something more fanciful.

There's a novel I've been laboring over for years, called River City, which is a sort of minimalist urban horror story that is also a love/hate letter to the city I grew up in. It has taken me a long time to realize that it's also a romance story, albeit a reluctant one. I've been conceptualizing it for a decade now. Maybe I'll finally get to write it this summer. It has been ten years since I left the place it's about, so it seems appropriate.

Clive Barker is at the top of my list. His books are what really pushed me into writing without fear of my own spirituality and sexuality. The Great and Secret Show, Everville, Imajica, and Sacrament are all amazing reads that transformed how I write and what I am willing to write about.

Anne Rice is great for sumptuous storytelling, and anyone writing supernatural horror/romance should read the Vampire Chronicles. For all their problems, they are still, in my opinion, the seminal work from which all modern vampire stories originate.

The book that inspired my interest in queer romantic magical realism is Dream Boy, by Jim Grimsley. That and Oranges are Not the Only Fruit, by Jeanette Winterson, though the latter is,ironically, somewhat dry.

I'm a second generation geek, and my biological parents met playing D&D at a gaming store in Norfolk called "Campaign Headquarters", which is now closed, sadly.

My hair has been blond, black, red, purple, blue, green, orange and pink, sometimes all within the same year.

When I sneeze I sound like a six year old girl.