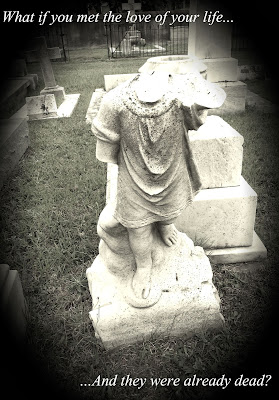 
Blurb: Since the death of his sister, Dariel's been haunting her grave. Then he meets Zach. It's love at first sight -- unfortunately Zach is a ghost. An accidental possession results in Zach moving into Dariel's body, but before they can fully figure that out, they learn that there's more to Zach's death that the suicide it had seemed -- much more. With the help of the cemetery cat, Dariel and Zach will have to confront the diabolic Isaac Caine and return Zach's soul to its proper resting place.

"In the olden days," he said, "the church wouldn't let suicides or unbaptized people be buried on consecrated ground. Suicide's a sin. So, sometimes people would drag their relatives over and bury them just outside the wall. About forty years ago, this particular church yard cut a doorway--" Zach led me beneath the arch. Drooping flowers adorned the curved exit between the main cemetery and the suicide garden. "-- between the two sections and held a little ceremony to forgive us our sins."

Garden was exactly the right word. There were no gravestones like in the neat rows behind us. Plants and flowers and small statues dotted the landscape and a tiny, low wall, no higher than my knee, circled the entire. I'd never even seen this part of the graveyard before. A placard in the center -- I snapped on my flashlight to read it -- gave the details of the history, much as Zach had just given them to me.

"I don't remember much from before. I was just here. So, the logic is, suicide." He turned his face aside for a long moment, and I barely heard his next words. "I mean, I was gay, after all. That's a sin, right? Certainly something I should kill myself over."

I blinked back sudden tears. "Don't ever say that," I snapped. I don't know what I meant to do, hug him or something, but that was stupid. He was long since dead, and there was no comfort I could give. I went to put my arms around him and... fell into him. Or he fell into me. I don't know. But suddenly we were all mixed up together. I could feel him thinking, inside my head. I could feel him marveling at the feel of a body, feel his mind directing my eyes where to look, down my long brown arms to strong fingers. He used my hands to touch my face.

One of the great aspects of life is duality. Fear of death, dying, and dead creatures; fascination with ghosts, spirits, and the places of the dead. By nature, human beings are illogical, inconsistent, whimsical creatures. We are a conglomerate of greed and wisdom, generosity and foolhardiness, capable of great sacrifice and great stupidity. Human beings are fascinating; and on the plus side, it gives us writers a TON of stuff to
write about.

I have a mild necrophobia; I get remarkably uncomfortable around dead things. Yet I grew up on a farm and have participated – actively – in the turning of chickens into dinner. I won't go to funerals (long story that has
to do with how I remember things and has nothing to do with respect or lack thereof.) but I find graveyards to be peaceful and wonderful places. I like to explore cemeteries and make grave rubbings. I have a framed rubbing from a gravestone framed and hanging up in my living room. I am fascinated by death, but I have come to grips with my own. I have not personally had a paranormal experience, but I don't in the slightest bit doubt friends who have. I have had two near-death experiences; neither of them involved white lights or feelings of comfort, but having skated so close to the edge, I'm not afraid to die. (I'd rather Not Die Right Now, mind you, but when it happens, it does.)

My story started from a simple image; a ghost in the graveyard, falling in love with a living person...

I'm blog touring around for the next two weeks... if you missed it yesterday, I had a spot at Torquere's Live Journal Giving Me The Creeps and I should be on Kinzie Rose's blog tomorrow..

Also, don't forget to enter the raffle... I'm adding prizes and whatnot, so click, enter, win!


a Rafflecopter giveaway
Posted by Lynn at 9:03 AM