Restricted Release; The Not Quite a Blog Tour by Sommer Marsden

Can you see me now?

I recently wrote a blog for Tabitha Rayne about the voyeurism in my new novel Restricted Release. Funny thing, though, I guess I felt the need to be fair because I put a little exhibitionism in my book to balance things out. In fact, the large (ceiling to floor) windows in the houses featured in Restricted Release could almost be considered a fourth in the sexual ménages found within its pages. They're almost another willing partner in the sexual situations.

Clara never considered herself a voyeur, but she also never figured herself for an exhibitionist...until Nadia and her toys showed up. Then all bets were off. Clara found her inner exhibitionist.

“How about you make her feel pretty, Nadia?” Matt said, his voice smoke and vapors.

It was in my head, his voice. In my gut and in my cunt and winding its way steadily into my heart. My soul perked up when he spoke, and when I thought of him touching me, it soared.

It was a dangerous thing, my connection with him. Too much, too fast, and yet—I craved it when I was honest with myself.

“I can do that,” she said. Her pretty slim hand found its way into my pants and she slid her finger along my slit. I was still wet from earlier and the rich musky scent of my previous orgasm filled my head.

“In fact I have just the thing if you’re game. I want you to put your hands up there on the glass. Both of them.”

I did it and prayed no one was on the roof looking down. It was really the only way for anyone to see me but for Matt. He could see all of me but for the window frame that cut the glass in half. He could see her pushed up tight against me. Her hands in my pants. The look on my face. And I could see all of him. Handsome him pulling a tall-backed stool up to the windowpane and taking a seat to watch.

“Actually, raise your hands like you’re under arrest,” she said loud enough for him to hear.

She slipped my tee over my head, mussing my hair. It fell in a crazy halo around my face. I was bare and chilled and then she pressed my palms flat to the window again.

“Check out those perky pretty tits, Matty,” Nadia said and left the room.

“Just be calm, Clara. They really are perfect. You worry too much. You are so…spectacular.”

And then I did cry because I wanted so badly to believe him but it felt so much like a lie to me.

Aren't you glad I decided to be fair? :)

Much like I said in my voyeuristic blog, if you asked me about exhibitionism as turn-on, I'd tell you it doesn’t really work for me. Not my thing. Not for me. But when I wrote that particular snippet...I gave it a second thought.

I might have to change my opinion on the whole being seen scene.


We sat in the center of his box-cluttered living room floor on a large blanket. Around us was scattered some leftover takeout, cheese, crackers, a box of lemon cookies, mixed nuts, olives, pickles and a bottle of wine.
“This should be disgusting,” he said, eating a pickle with a piece of cheese on a cracker.

“But it‘s so, so good,” I said, eating my own cracker with cheese. I ate it in small nibbles because my stomach was electric.

“Really?” He cocked his head. “Because you barely seem to be eating.” He touched my leg with his bare foot. He was warm.

“I‘m eating.” I pulled the sweatshirt he‘d draped over me close to my body. Besides his sweatshirt, I wore my white slouchy socks and we‘d located my panties.

I ate the rest of my cracker and took a sip of wine. It was nice. It had that whiskey aftertaste I usually hate and yet I didn‘t this time. There was enough of a fruity burst in it to temper the oak. “I don‘t think you look dumb at all. I think you look really smart,” I said.

I hoped he didn‘t hear the mixture of annoyance and anxiety in my voice. I wanted to get past the food thing.
“So tell me, mysterious neighbor. Why do you seem to be a person who sticks very close to home? Why do you seem so…gun-shy? Is that a good description?”

I tried to nod but my head barely moved.

“I know why I‘ve been a monkish man for almost a year. Why have you been Sister Clara Barrett?”
I cleared my throat. “I don‘t know.”

He cocked his head and then cut his eyes away. He tried to make it look nonchalant, but I knew what he was doing. He was giving me a moment to consider the situation.

Matt held up a hand, looking me right in the eye so I felt totally naked. For a crazy moment I felt as if there were no barriers between what was inside of me and what was inside of him. He said, “You were bold enough this morning to straight up tell me you wanted to have sex with me.”

I opened my mouth but he kept that silencing hand up and I shut my mouth with an audible snap. His fingers slipped beneath my sock, circled my ankle and he said very softly, “Please let me finish before you throw up your security fences and barriers.”

My throat was tight. I nodded.

I made a small noise of protest but then laughed. Our laughter mingled and I felt a rightness I couldn‘t remember feeling. It scared the shit out of me.

“But you won‘t tell me what your history is, Clara?” He didn‘t say it to belittle me. I could tell he wasn‘t angry. It was simply a question to help him understand. And that made me tell him.

I finished my wine in three big gulps and leaned back on my hands, keeping my legs in crisscross-applesauce fashion.

“I was married.” I picked at a loose thread on my sock and then looked at him. His eyes were amazing. Gorgeous and kind and deep—if they were the windows to Matt Millen’s soul, his soul was a wonder of the Universe.

“I‘m going to say this in one big breath and get it over with, okay?” I said, feeling my eyes sting a little. I willed myself not to cry. I could not cry. That would be stupid. That bad part of my life was over. I needed to move past it.

“Okay,” Matt said. His hand stayed around my ankle, loose but comforting. He wasn‘t eating or drinking, but he wasn‘t poking or prodding either. He was waiting. Listening. Paying attention.

“I was married to a man who wasn‘t…nice.” I shrugged but it felt like I was being blasé about something that was anything but. So I stilled my body and went on, willing myself to be strong. “He didn’t beat me or anything. But he carved me up emotionally. My sister Cat once said it would have been better if he had beaten me.” My voice had gotten small. My stomach hurt.

His eyes flashed with anger but he kept his face schooled. “And why is that?”

I blew out a shuddery breath and whispered. “She said that if he‘d left bruises on me—broke bones—I‘d have known that it was wrong. But as it stood, he got inside my head and…” I tapped my temple. “Fucked with me. He played on my biggest fears and weaknesses to control me. It‘s like in those books where you read about demons and possession and Hell,” I laughed. “He infiltrated my brain and he trapped me with my own fear.”

Matt sighed and popped an olive in his mouth. “I‘m going to go out on a limb here, slim lady, and say one of your issues is food and body image?”

My cheeks heated and I nodded, saying nothing at all. I had to fight the urge to cover myself with his sweatshirt. To pull it down over my knees and hide myself in it. It was a war I still waged most days, even thought I was alone about 80 percent of the time.

He watched me. He was waiting.

Clara is the recovering anorexic who’s nearly become a shut-in after the end of her emotionally abusive marriage. Matt is the new boy next door. Graphic artist, nice guy, funny…accepting of Clara.  She wants him, he wants her—but Clara is afraid.

Nadia is the stand-in—Matt’s idea, Clara’s challenge to accept. A longtime friend of Matt’s, she’s a sexual surrogate intended to guide Clara until she’s not afraid of Matt’s desire for her or hers for him. Twosomes become threesomes, watching becomes touching and lust becomes love.

When Matt moved in next door, lust was the last thing Clara expected. Two lovers never crossed her mind. And the need to make a choice was something she thought she’d never encounter. But she’s bolder now, healing, and everything has changed. And a choice must be made, no matter how hard.

Inside scoop: Clara’s healing includes a hot woman who wants to show her how desirable she is, as well as f/m/f menagés. 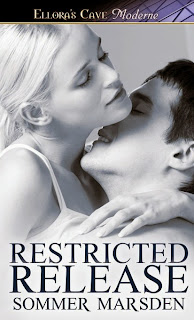