So, talking to Chris T. Kat today and the super-hot cover of Hunter's Hunt - which keeps staring at me while I'm typing this up, so I might get distracted. Yeah, go ahead, ask me how a guy with no head is staring at me... no, nevermind, just... wow.

The book cover has knocked my brains loose, so forgive me, and I'll just turn this over to Chris, right? Yeah.... book.... boook....

My favorite is Silver Lining, which is a Bittersweet Dreams story, published by Dreamspinner Press. I wrote this story within a week and it was all I could think of. Writing Silver Lining hurt and I wasn't sure whether I could go through with it but I'd tried to put the idea aside and write something else for months. I got another story written but my mind always went back to Scott and Riley's story until I gave in.


Tell me about your first publication. Who was it with? How did you feel when you got that acceptance?

My first publication was Seizing It, a contemporary m/m romance, and was with Dreamspinner Press. Seizing It was the very first original fiction story I've written. Before that I've solely written fan fiction (lots and lots of fan fiction). When I submitted it I wanted to try but I didn't believe I'd stand a chance, so color me surprised when I received an acceptance e-mail with a contract offer. I stared at the e-mail and contract for hours, told my husband, and simply floated on Cloud Nine for the rest of the week. :)


How much of your life and the people you know end up in your work?

Since I work as a special ed teacher some of my characters deal with a disability because that's what I know a lot about. I love working with children or simply having children around, so there are a couple of books that have kids as an integral part (A Purrfect Match, Attachment Strings).

Many of my books show my love for animals. In Seizing It, Kit loves his big dog Jackson to pieces, in Secret Chemistry there are wolf-shifters as well as wolf-fox shifters, in A Purrfect Match one of the main characters is a cat-shifter and in The Caveman and the Devil the main characters work as zookeepers at the Philadelphia Zoo.


Tell us about a real person who has had a lot of input to your work, someone who inspired you or encouraged you, or even discouraged you and you have to prove them wrong.

There isn't one person who encouraged me. During my fan fiction days lot of people encouraged me to try my hand at writing original fiction. I shied away from it for a long time but they kept going and my husband—rather exasperated—told me to start writing and not be so intimidated by the words “original fiction” and eventually I did. I haven't regretted my decision. As much as I loved writing fan fiction, coming up with my own characters and story lines is even more rewarding and challenging.


What projects are you currently working on? Are you willing to share a small excerpt from a work in progress?

At the moment I'm between projects. The last story I've written is called “Tidal Changes” and features a merman-shifter. I had a blast writing this novella and hope to be able to submit it soon.

Rick turned around to go back to the conference room when a sense of foreboding drew his attention to a large pane section at the other end of the corridor. Marty stood close to the window, both hands pressed against it, and his nose could only hover an inch away from it. Rick watched Marty's reflection on the glass, taken aback by the awed expression on Marty's face; like a small child that was seeing something beautiful.

The sounds around him lessened and only a low hum remained audible. It took Rick a few moments to realize the source for the hum—it had to be Marty. Quickly, Rick glanced around, sure other people would be stealing glances Marty's way, but no, no one seemed to register the humming noise.

The sound stopped as abruptly as it had started, and Rick turned his attention back to Marty, who had left his observation point and looked straight at Rick. Neither of them moved, not even a facial muscle, and the silence became unnerving. Marty took a step into his direction and Rick held his breath.

A nurse interrupted their moment when she knocked into Marty, spilling folders everywhere on the floor. Rick limped toward them and reached them when all papers had been stuffed back in the correct order. The little, red-haired nurse apologized profusely before she hurried on, with her face as bright in color as her hair.

Marty straightened up, casting a wary look at Rick. “Hey.”

“Hey. She sure was impressed by your knight in shining armor attitude,” Rick said.

Marty laughed, a sound that inevitably brought a reluctant smile to Rick's face, before he asked in a subdued voice, “There's a flea market on Saturday in Ocean City. I took the liberty of glancing at your schedule and we're both off work, so... would you like to come with me? Have a late breakfast and see how much money we can splash around?”

Rick gazed at Marty for a long time, digesting the information. “As friends? Or as a date? Just so I know whether I should get my hopes up again.”

Surprised but thrilled all the same, Rick replied, “All right then. Want me to pick you up around nine?”

Marty shook his head. “I'll come to your place around ten. I need my beauty sleep.”

“I'll be starved by that time,” Rick grumbled.

Marty patted Rick's stomach, that, albeit still solid, had more fat to it than it had a couple years ago, and said with a twinkle in his eyes, “You'll survive.”

Rick expected Marty to just turn around and stroll away but Marty seemed full of surprises that day. He stepped into Rick's personal space, rose on tiptoes and pecked Rick's cheek before he ambled away, whistling to himself.

I write on the weekends, usually around three to four hours per day. Whenever I'm off work I try to spend the mornings writing. I belong to that group of writers who can't write in the evening, so I have get along with the time I have.

When I don't work I simply go on from where I left the day before but if it's only weekend writing time I read the last chapter on Friday evening to get in the mood again. Otherwise I'll spend the first hour (or more) re-reading and tinkering around and then feeling frustrated because I didn't accomplish anything in my precious writing time. ;-)


What writers or novels do you consider “must reads”?

I'm not sure if I'd consider any author or novel a “must read” but of course I do have favorite books and authors. I love the work of fantasy author David Eddings, especially his Belgariad series. As for the m/m genre: I really enjoy reading the works of Lyn Gala, Josh Lanyon, D.W. Marchwell and Tali Spencer. 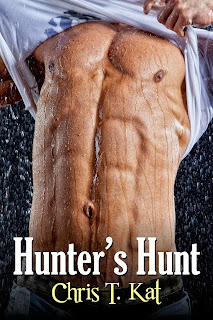 Wanted: one bear. Must be burly and hairy, and strong enough to paddle. Hunter Bell is on the prowl, and he knows just where to find his prey: at the Bear Trap, a gay leather bar he’s more than a little familiar with. So many men, so little time. He’s just about to pounce on his choice of the evening when a newcomer enters the bar, turning everyone’s head. Adrian Michaels is everything Hunter despises in a man. He’s lean and boyish looking, and he has the deepest dimples Hunter’s ever seen.

And yet there is an immediate attraction, one that neither man can deny. They’re both too astonished to do anything about this apparent interest in one another, and they waste their opportunity. Now it’s up to Hunter to forget about his stereotypical preference and go for the guy that’s just entered his dreams. If only he can admit to himself that Adrian’s what he really wants...

It took a moment for the newcomer to absorb his surroundings and, when he did, he flinched. A few men chuckled upon discovering the baffled look on the guy's face, which proved that he indeed hadn't known about the nature of the Bear's Trap. Hunter watched him shift from one foot to the other while most men turned back and resumed their conversations. The new guy remained rooted to the spot, dripping water all over the floor, before he squared his shoulders and pushed through the mass of bodies. At last he reached the bar, where Hunter was still standing, for some unknown reason interested in this guy.

The newcomer waved at the bartender. "Is there a phone anywhere?"

"You don't have a cell phone?" another guy asked, perplexed.

The newcomer shot him a 'drop-dead' look, startling Hunter into a laugh. The new guy turned toward him with a quizzical look. Hunter was face-to-face with an irritated man, whose dark blue eyes were blazing.

Hunter pulled his cell phone from his pocket and held it out to him. "You might better go to the back. Otherwise, you won't be able to understand anything."

Baffled, the other man took the phone. "Thank you, uh, what's your name?"

"Hunter." He held out his hand for the other man to shake.

Adrian gestured with the phone toward the end of the bar and raised one delicate eyebrow. "This way?"

Hunter nodded and beckoned Adrian to go past him. Adrian only made it a few feet before one of the other men groped him, drawing out a surprised yelp from Adrian. He shoved the guy aside then proceeded farther into the back. On his way, he struggled with advances from more guys than Hunter could count. At some point, Adrian whirled around and, even from that distance Hunter could see the fast heaving of his chest, the free hand balled into a fist, and the stressed look on his face.

With a sigh, Hunter pushed away from the bar and strolled after Adrian. He caught up with him right when another man, a regular customer called Dean, made a pass at him.

"With you? Since when are you going for his type, Hunter?" Dean asked with a sneer.

Hunter shrugged while he sent a dark glower toward Dean, which caused the other man to drop his eyes and inspect the contents of his glass thoroughly. Hunter laid a hand on Adrian's shoulder and pushed him ahead. Adrian cast him a worried look but walked where Hunter steered him. After opening a door to a private room at the end, he ushered Adrian through and switched on the light.

Adrian clutched the cell phone in his hands, staring at Hunter with an apprehensive look. Hunter noticed that Adrian's eyes were of a dark, almost navy, blue. He swallowed. Even behind the glasses, Adrian's eyes seemed large and expressive. He had to concentrate on listening to Adrian's question. "Is this... is this some kind of leather bar?"

"Yeah. Never been in one before, have you?" Hunter asked.

Adrian eyed him before he obviously came to some kind of decision. "You free for bodyguard duty for maybe an hour?"