The relationship that Lynn and I have encompasses many things. We've been best friends for more than twenty years. We were roommates for two. We've been writing partners for probably fifteen. I've been her editor for almost everything she's published with Torquere Press over the last couple of years. We've gone on vacation together, joined forces for holidays, and commiserated with each other over our crazy families, broken hearts, and screaming frustrations.

We're also frequently each other's beta readers. And I will say that Lynn is, hands-down, the best beta reader I've ever had. And I'm not just saying that because this is her blog!

(Note from your author: She totally is...)

I had written this book, see. It was pretty bad. The main character was wishy-washy and passive to the point that he didn't even react to things in his own head. The mystery plot was overblown, unlikely, and excessively predictable. The romance was weak. The sex scenes either went too far or not far enough. The resolution was infuriatingly deus ex machina, and the epilogue didn't actually provide any satisfaction -- it left the characters' futures clouded by a huge question mark.

I am often a harsh judge of my own writing (most authors are) but this was just Bad. Bad bad bad. (Lynn, having read it, didn't think it was quite as bad as I did, but she agreed that it was Not Great. And also that its noncon sex scenes made it unpublishable.)

After leaving it in a drawer for, oh, five or so years, I had an idea about how to fix it. It involved a new plot. And a new romantic interest. And a new supporting cast. Also, my main character got a major personality overhaul.

It was, in fact, a brand new story, only linked to the original by the name and profession of the main character and a single simile that I loved so much I couldn't bring myself to get rid of it.

Being the length of either a really long novella or a really short novel, it took me about six months to write. (NaNoWriMo material I am not.)

When I'd finished it, I wasn't very happy with it. And so I did what any reasonable author would do. I sent it to my favorite beta reader (that would be Lynn) and I said, "This sucks, and I can't figure out why. Please tell me, so I can try to fix it."

Lynn messaged me the next morning and said, "I opened it up just to make sure the file wasn't corrupted, and promptly stayed up until two in the morning so I could finish reading it. Now I'm tired and it's all your fault." (One day, Lynn will not be snarky with me and I'll know she's been taken over by bodysnatchers.)

She sent me a more detailed email later in the week, pointing out a few things that did, actually, need some polish, and a couple of contradictions and timeline issues. Which are things that any good beta reader will tell you.

But Lynn is the best, because if it wasn't for her, Foxfur would still be in a drawer, gathering dust while I tried to figure out what was wrong with it. She always gives me the best writing advice. And in this case, that advice was: "Just submit the damn thing, okay?"

If you'd like to check out the book that kept Lynn up until 2 am, you can find it at
Torquere and Amazon 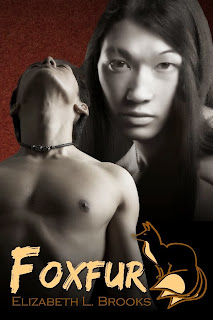 Pleasure-slave Cheng took no particular note of the red-haired woman when she purchased his services, but the morning after her departure, Cheng is taken into custody by the Emperor's own guards, a custody they tell him is for his own protection. Frightened and confused, things go from bad to worse when the investigator is revealed to be one of the rare and terrifying Chained Mages, who explains to Cheng that the red-haired woman was not what she had seemed to be, and that not only Cheng's life, but the lives of everyone around him, depend on their finding her as soon as possible.

The Chained Mage Jin does not like traveling to the country of his birth, where he is at best feared, and at worst, despised. But he can't allow his personal feelings to interfere with his mission without risking the lives of innocents. The lissa (a fox-demon) has placed a spell in Cheng, a spell designed to turn his sexual energy to murderous ends, making Jin's own growing admiration for the slave a greater risk than he's willing to admit. And worst of all, they're not the only hunters on the lissa's trail!