And first a word from your author/blogger/editor

1) Sorry I'm running a bit behind. I had an abundance of real life emergencies last week that threw my schedule for a loop. I had intended to format and prep this entry on Friday so it'd be ready to go and instead, it's almost lunch on Monday and I'm just now getting to it. For those of you in the know, thank you for your well wishes and it looks like everything is going to be okay. For those of you who missed out, let me tell ya "possible cardiac event" are not words you want thrown at you about your life partner... (again, he's fine, thanks for the thoughts! But it was scary and it was VERY distracting.)

2) I was really happy when I got a submission from V.L. She's been on my radar as an author to watch since I first stumbled across her in He Loves me for My Brainsss, which featured Two Guys Walk Into an Apocalypse 1. I've been a fan ever since, and you should be, too! I'm particularly fond of her Of Gods and Goats series; funny stuff.


Thank you for having me here for a visit, Lynn. *Hugs*

I have learned to listen to my muse, so when she directed me to attempt to pen a western for NaNoWroMo last year, I broke out my literary chaps and ten-gallon hat. By the end of November 2013, I had an M/M historical romance novel under my belt. Spurred (pardon the bad pun) by how much I enjoyed that western, I sat down and came up with another genre I wanted to try for the 2014 round of November madness. I decided to write a pirate tale. Not just any old pirate tale, I wanted to pen a space pirate tale. Yo-ho-ho! as well as a "To infinity and beyond"!

Feel free to check out the info below about my upcoming release, an M/M zom-rom-com, Two Guys Walk into an Apocalypse 3: He's a Lumberjack and He's Undead.

Paul and Gordon aren't your typical zombie hunters. They're a loving couple of educators who might be infected by the virus that is turning the world's population into mindless, undead eating machines. So why haven`t they turned?  Well, Gordon has a theory about that. He suspects that those who march under the rainbow flag just might be carrying the cure for the plague in their bloodstream. Zendra, the massive pharmaceutical company where the mutated virus was made, certainly seems to be in a hurry to round up all the gay survivors they can grab.

To avoid the clutches of Zendra, Paul, his partner Gordon, and a ragtag band of survivors head into the Great White North - the land of maple syrup, hockey, lumberjacks, and thick bacon. Here they plan to spend the winter, hopefully safe from roaming bands of undead, militaristic companies with far too much power, seedy groups of other survivors, and the always-dreaded moose. Can two guys in love lead a motley crew to safety?

Two Guys Walk Into An Apocalypse 3: He`s a Lumberjack and He's Undead will be available at the Torquere Press Store, as well as all major eBook retailers on October 29th, 2104.
Torquere Press 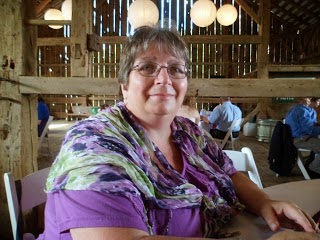 V.L. Locey loves worn jeans, belly laughs, reading and writing lusty tales, Greek mythology, the New York Rangers, comic books, and coffee. (Not necessarily in that order.) She shares her life with her husband, her daughter, one dog, two cats, a steer named after a famous N.H.L. goalie, and a flock of assorted domestic fowl.

When not writing lusty tales, she can be found enjoying her day with her menagerie in the rolling hills of Pennsylvania, fresh cup of java in hand.
I love to meet new friends and fans! You can find me at-

Email ThisBlogThis!Share to TwitterShare to FacebookShare to Pinterest
Labels: Among the Stars, Coming Together, guest post, v.l. locey