First off, it's the 6th day of the Smutty Advent Calendar. M. A. Stacie is giving away a bag of Starbucks coffee. 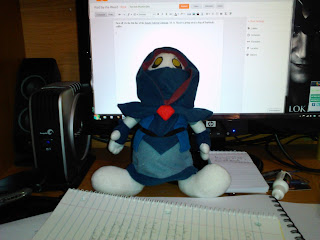 Today I want to talk about the crap on my desk.

This is my 10-inch plushie Dick. He's probably not what people have in mind when I say I have a plushie Dick, but hey... I like being able to make the joke.

I have a lot of cute, weird, or just touchable stuff on my desk. My Jane Austen action figure, my tacky octopus Christmas tree ornament, my three dancing mushrooms... 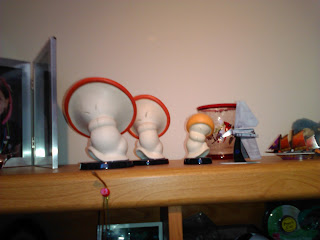 Now, admittedly my desk is the repository for a lot of crap, but the actually decorative stuff... a lot of thought goes into that stuff. I want to feel both relaxed and inspired in my work-space.

I've always loved the dancing mushrooms... and a few years ago, my mom finally found these figures for me. (If I was a major tattoo person, I'd probably get these guys on my lower back. As it is, I'm still trying to talk myself into getting an octopus on my leg.)

I have stuff from Star Wars (2 lego copies of Slave 1 because in the whole show, no one is more badass than Boba Fett.) and a teddy bear made from an old mink coat and a totoro (with his arm in a "cast". He was a get-well present from a friend when I broke my leg in 5 places) and a geode, and some tiny pirate ships from a defunct card-game.

Every single one of these things has associations for me. Everything I keep has a story behind it.

And nothing has more meaning to me than this: 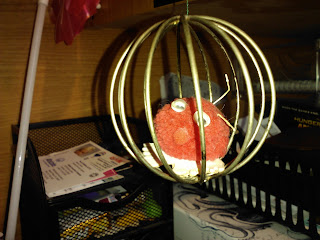 This is my muse.

He lives on my desk, no matter where that desk is, no matter where my home is. No matter what. If I'm going to go somewhere else and do some writing, he goes in my bag. (The cage was initially to keep my cat from eating him, back in the day, and as his little sticky feet aren't sticky anymore, and haven't been for decades, this is a good way to make sure I don't lose him.

I started writing stories when I was in fifth grade. In 7th grade, my parents bought me a word-processor for some holiday or other. Keep in mind, this was the 80's. This was a tiny little thing, grey, with a two-line "saved" window. You could actually go back and edit up to two lines of text before it would print those lines out. It used a sort of punch-out tape to stick letters to paper (and if I wasn't careful, you could peel those letters right off the paper) and had a very, VERY basic spell-checker. I typed out about two dozen short stories and one completely terrible, derivative horror novel.

Muse was a birthday present from the girl up the street. Yes, she gave me a homemade fuzzy ball with feet and eyeballs as a present. She had a ton of the things stuck to her ceiling in her bedroom, and I used to like to lay on her bed and stare at them.

I stuck him to the top of the word-processor and he watched me typing up stories for most of high school before my WP died a smoking, fiery death. (When the magic smoke comes out of the machine, it stops working!) I cried.

And then I carefully peeled Muse off the smoldering machine and stuck him on my desk. My cat promptly jumped onto the desk and batted him onto the floor and under my bed. I recovered my Muse, stuffed him in the little cage (which is actually a leftover cat toy and probably wasn't the best idea I've ever had) and tied the whole kit and kaboodle to my desk lamp, so it hung down directly over my work space.

And there he's been. Since I was 13 years old. He's lasted through seven computers, two marriages, five cats, three rats, two lizards, a turtle, probably ten hamsters, dozens of boyfriends, three girlfriends, tons of novels, short stories, really bad poetry and a few disastrous attempts on my part to write song lyrics.
Posted by Lynn at 9:00 AM