My goodness, it's been a busy week!

Is it really only Wednesday?

I got fun news, excellent news, and fantastic news over the last three days.

On Monday, I got cover art for A Marked Man...

I'm also "in talks" with a librarian friend of mine who apparently has a small section of my books in her library. I keep trying to get her to take a picture for me, but she forgets, and the library in question is about 10 hours of driving from here, so.... (In talks meaning she was asking me "so, how do I get this book so I can put it on our shelf?")

She's also the original Catreen; meaning when Bastian Hooke was a role-playing character, she was in control of his love interest. Now, since those days, both characters have undergone fairly substantial overhauls... Bastian got younger (he was originally in his mid to late 30s for the game, and now he's 27.) and acquired some... interesting relatives. Catreen lost her psionic abilities in exchange for a powerful magic sword and dragon-slaying capabilities. She also gained an extremely... unpleasant ex-boyfriend.

So, I got to show her the cover; she made some suggestions for a cover model for Book 2, A Wanted Woman, which I'm quite pleased with... and she's happy with this portrayal of Bastian... in fact, it's hard to say who's more squee about it, me, or her.

Last night, I got an email from Brandon Clay, my cover artist over at Torquere. I wasn't sure he was going to be my cover artist this time around, but I was hopeful... so I included this note to him in my Cover Art Request Form (CAR)

This page has the cover for Roll, Book one, on it. I'd like the books to match, (also, it's the same cover model in a different pose) I'd like the background to be Blue (obviously) with the same font. “Good Times and Mardian Demo” are the ones that Brandon told me he used (assuming you're not brandon. If you are, hi brandon)

Brandon was really happy to work on a second cover for me, and I think they'll look really good on the shelf next to each other... (It's actually one of the reasons I drive my cover artists nuts by asking about Fonts and colors is that in case something happens and I have a new cover artist by the time a sequel comes out, I want to help the new artist get things that match... I have had art that did Not Match and I was not enamored with it.) 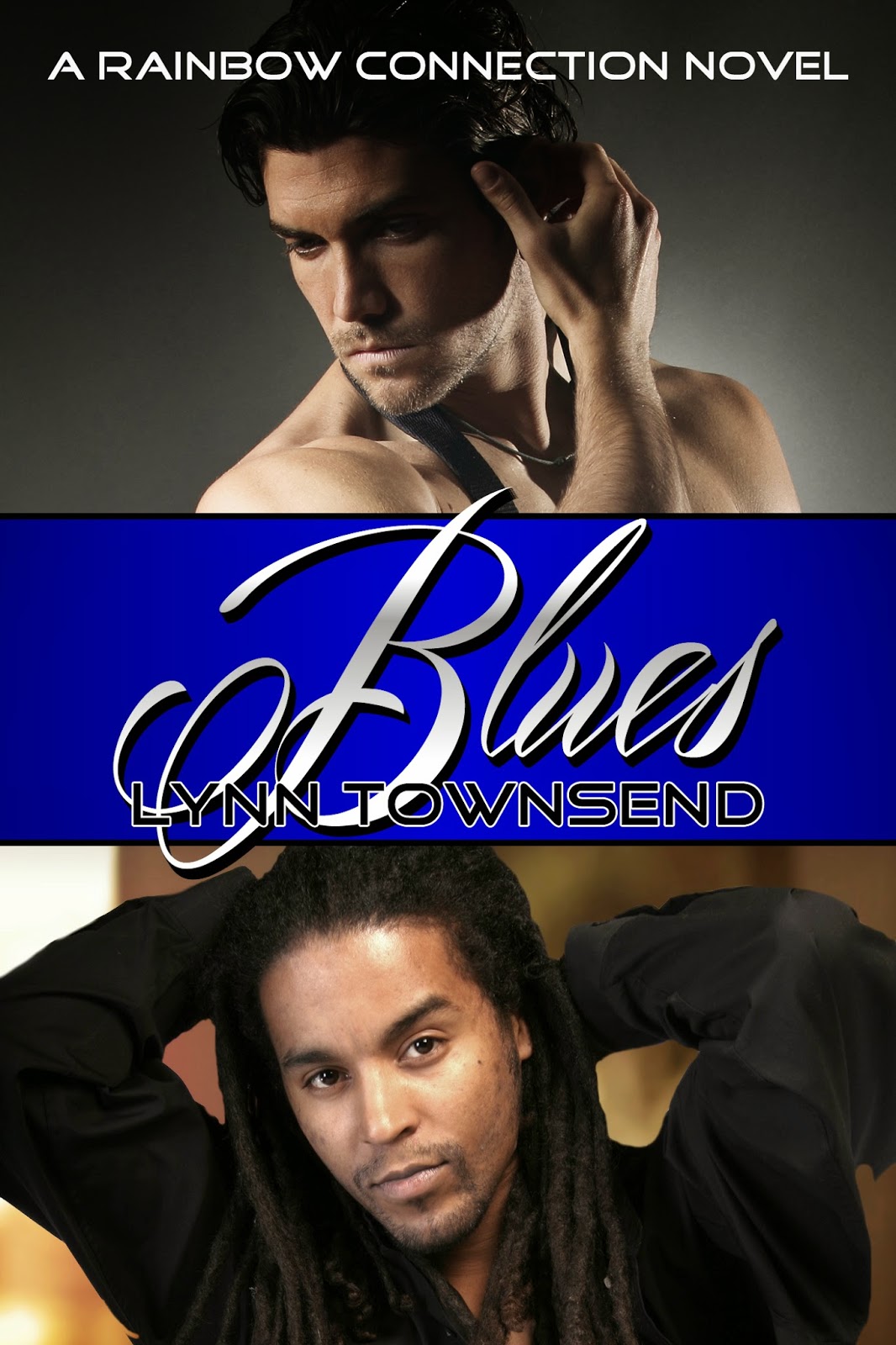 Rising sophomore Beau Watkins gave up everything to be with his boyfriend, Vin. Beau is disowned by his father, tormented by his brother, is rapidly running out of money, and suffers from Post Traumatic Stress Disorder. On top of that, his boyfriend seems to see Beau as little more than a live-in maid. Troubled by word of his missing father and fighting nightmares of his own, Vin Reyes turns to alcohol to drown his pain. What's worse, a handsome transfer student is a little too interested in Beau. Vin throws away everything that's made him happy with both hands, terrified of his own feelings of inadequacy.

When Vin and Beau's happily-ever-after turns into a train wreck of drinking problems, resentment, insecurity, jealousy, and violence, they both try to pick up the shattered pieces of their lives. Their mutual friends, Hector and Ann-Marie, try to help the two young men as best they can, but neither want to listen. Beau accepts a morally questionable job offer to pad his finances and Vin starts a downward spiral of self-destructive behavior that sends him right for rock bottom. Can Vin and Beau win through doubt and guilt, jealousy and recklessness, to find their place in the world?

Slightly updated my 'blurb. (It's not yet run through my editor, so there still might be slight changes to the 'blurb...)

Also, Blues was moved up in production; it's almost finished, just one last copy edit to go through, and it'll be ready. And once again, through no real fault of my own (seriously, I got on Vamptasy's calendar for Howling Bitch in March very early, like before the book was even FINISHED!) and then submitted Blues in August... it's NOT my fault that the original publication dates got practically on top of each other... but my editor and I talked about it... and we've got the publication date of Blues moved up to January 28th...

So there's that, and that's fantastic...

And this morning, I got up to an email from my publisher accepting Classic (the third in the Rainbow Connection series) for publication in early Fall of 2015...

Classic will be the last of the series that features Beau and Vin as the main characters. Vin has a significant role in All That Jazz, which will be Hector's story, and Beau has a major supporting role in Punked Up, which is Ann-Marie's story.

(My plan for the covers is to continue along the lines of the ones I have now, so Classic will have a yellow title tag and have Beau at the top - still trying to decide if his niece should be at the bottom or if a city-scape of Bangkok... both have substantial meanings for book three... and then All that Jazz will be green, with Hector at the top and Finn at the bottom, and Punked Up will be Ann-Marie at the top and her girlfriend on the bottom with a purple title bar.)

Query; I've got some ideas for some "connections" stories for the non LGBT characters in the stories... Josh, for instance, who my editor says deserves all the bro-points for being a really good friend even when Beau is acting like a horrible ass. (and he really, really is...) and David, the enigmatic bodyguard/driver has some incredible backstory that I've never found a way to work into the novels... or Kate, who has a very sweet story with her husband, Mark... as well as some side stories that I think people would want to see, but also didn't really fit well...

Roll, for instance, originally contained a second sex scene between Beau and Hector that started Beau on his bondage thing. (yes, it's a thing, yes, he ties Vin up again in a Very Hot scene in Classic and Yes, you have to wait a while for it...) After some discussion about it with my editor (who never saw the scene, actually...) I removed it because it wasn't relevant to plot and it might have established that it was Vin moving in on Hector's territory rather than the other way 'round... Jody, for instance, the RC vice prez; is trans and apparently reading through the stories again, that never comes up At All...

Unfortunately, because of the nature of these stories, most of my publishers won't be particularly interested in them. So, I guess the question is; would seeing these stories be something you - as readers - would be interested in?

If yes, keeping in mind that I'd want the stories to be edited and that means paying an editor (Elizabeth loves me. She doesn't love me that much!) and getting cover art... I don't want this to be a halfhearted effort. These stories mean a lot to me, and I just can't see compromising on quality. Would you be willing to pay for the stories; they'd be hosted here on the website, and I would make them available as a kindle or .pdf download.

I was thinking of doing this in a few different ways; the first would be to put a donation bucket up, and once I got a certain amount of donations (say $150, which would cover editing and a piece of cover art) I would post 3 stories for free, and then an additional story for every $50 after that. (with the option to close donations if money gets further ahead than I am... )

Option 2; I could charge a subscription fee to the website ($5 a year) with the stories behind a pay-wall... (I would need at least 30 subscribers to go forward with this plan)

Or Option 3; I could charge 99 cents per story and only people who pay directly get to see the stories. (Each story would be about 3,500 words to 7,000 words, with longer stories being broken into parts...)

I would really, really love some feedback on this...