Introducing Jade A. Waters; author of The Joy Ride

From your regular blogger: I was so thrilled when I got a submission from Jade A. Waters. I hadn't known her long, but last year I picked up a copy of Big Book of Orgasms and read her naughty little story, the Flogger. Which, if you're interested, you can currently hear Rose Caraway's reading of them on the Kiss Me Quick podcast... and you SHOULD be interested... 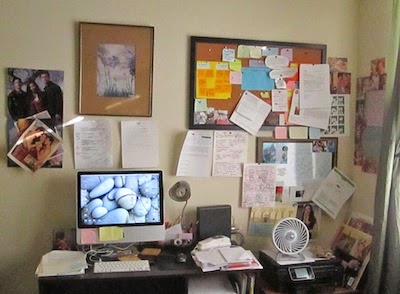 Hi Ms. Townsend! Thank you so much for this fun set of questions and for having me on your blog! I’m so excited to have a story in Coming Together, both because it’s helping such a great charity and because I love the sci-fi theme. Since I used to write spec fic before I seriously committed to erotica, I enjoy the opportunity to throw my characters back out into space whenever I can.

I’ve attached a picture of my desk space (yikes—kind of messy, but that’s how it goes…). The thing is, I like having a collection of quotes and words all around me when I’m writing. I love lists, in particular word lists, and I’ve posted these things around my writing space since I was a teen—now they’re just dirtier words! The bulletin board you see in this pic originally had to-do lists on it, but now it’s become a bit of a memento space with quotes and comments from great friends, or encouragements from people, or even just fun and inspiring things I’ve heard along the way. I’m a pretty visual person, so I like to have pictures around me, too—the Vampire Diaries folks, for example, delight me to no end, so I have them up. I also have a picture of Katy Perry because I think she’s ridiculously va-va-va-voom. But, just to mellow out the scene, I have a drawing from my niece, a couple family pics, some artwork from my bestie, and an illustration I’ve had above my desk for about three decades now. It’s Arthur Rackham’s “The Fairy’s Tightrope.”

Now on to your questions:

I wrote a Halloween story about an evil pumpkin when I was 7, and my parents sent it in to the paper. I remember getting this rush over seeing my words in print, so I kept going. Also I talked a lot, so my parents encouraged me to channel it somewhere. :) In 5th grade I wrote a story about a bear with a tutu (it was called “The Bear with the Tutu,” go figure). My teacher read it and made me promise I’d keep writing, and then when I was 12, my dad wrangled an old Mac from a friend to assist with the hours I’d spend scrawling on paper. I loved how lost I could get in a story, and I honestly loved the sound of the keys tapping, too…so I just kept creating. Over the next two decades I toyed around with a few styles and genres, until I finally decided I should run with erotica for real. It was a decision in response to what I fondly call my third-of-a-life crisis, which was basically a series of events that changed my writing focus (and upped my joy!). You can read more about that journey here. 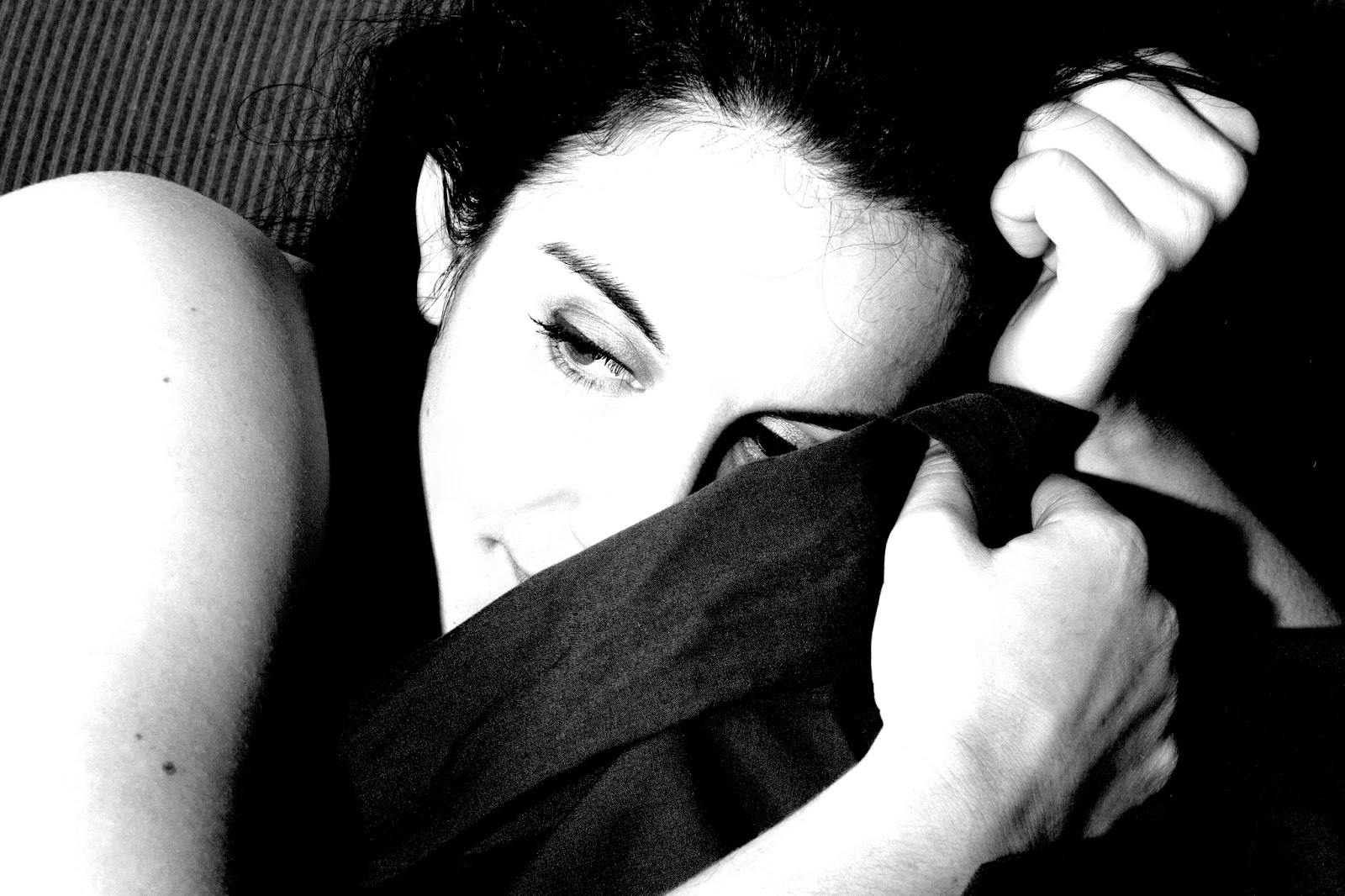 I’m torn between two, and they’re coming out over the next few months. The first will be in Rose Caraway’s Dirty Thirty, an audiobook. It’s called “The Doll” and it’s an erotic spec fic allegory. I was working off this analogy I used once of being in a relationship that made me come alive, and yet also feeling like a broken doll after it ended…and a couple years later I wrote this little piece about a broken marionette coming to life through the adoring love of a lost doll maker. In a completely different manner, I love “73A,” which will be out in January in Alison Tyler’s Just for Him. It’s a seriously filthy second person story voiced by a woman in her living room to the painter on her patio. It starts with the line, “You’re working on my fence right now, and all I can think about is sucking on your cock.” It’s really sassy. And did I mention filthy?

I have a story coming out in the Dirty Thirty, too, called In the Closet, which is NOT what you think it's about... it's always fun to be in the same book with authors that I adore so very much... kind of a thrill, ya know?

Usually they just arrive in my head, but on occasion I’ll use an online name generator. Worst case, I run with “[super hot guy]” or “[sexy girl name]” until the names hit me just right.

My first publication was “The Flogger” in Rachel Kramer Bussel’s The Big Book of Orgasms: 69 Sexy Stories. This story was the first I’d ever sent out, and when I got the news, I’d just arrived home from a trip to see my cousin in Denver—except I’d been snowed into Denver an extra day and I’d had a guy I really liked (whom I was supposed to meet that night for a date, no less) tell me he’d started seeing someone else. I walked in the door exhausted and annoyed. And then…there was an email from RKB. I started squealing—super loud and really excitedly. There was definitely dancing in the living room, despite it being somewhere past midnight.

Wow. I love this question. So let me say first that I write mostly fiction, *but* I believe that all stories have a kernel of truth to them, it’s just the kernel size that fluctuates. Sometimes, a story has a big kernel behind it—it could be that the character is an extension of me, or it could be that the story is a reworking of a real event or a real connection, or even that it’s loosely based on some random real thing that happened in my life. “The Flogger,” for example, was based on the fact that I had an unused flogger sitting in my closet for way too many years (it’s since been used, phew). In another case, I have a short story coming out down the line that is a retelling of an actual romance I had. The closeness to real life is certainly not the norm, but I believe that even when it’s not intentional, writers naturally embed pieces of themselves in their work. That’s what makes their stories powerful.

Well, this depends on the day, but my best writing time is always in the morning. I get up bizarrely early—4:30 during the week and 5:30/6 on the weekends—and before I start anything I have a slow, warm breakfast paired with a giant almond milk latte (the first of two), then I handle my two high-maintenance cats (read: medication). Within about an hour I’m ready to go. If it’s a weekday I’ll squeeze in up to an hour before work. On the weekends I tend to ignore the world until midday, when I’ll take a lunch break or go workout. I’m fairly useless at the keyboard after 2 pm, so I try to handle “admin stuff” after that.

I am forever charmed by Shanna Germain’s work. She’s so eloquent in everything she does, and there’s such a beautiful weight to her tales. I like gravity in stories, especially in erotica—I don’t feel like we see enough of that in the genre, unfortunately. Alison Tyler is another fave of mine because she’s always breaking rules and writing hot, and she has a real confessional flair I adore. On the non-erotica side of things, I love Carol Goodman. The Lake of Dead Languages is one of my most favorite books of all time—it’s got a gothic-lit feel but is extremely contemporary. Oh and Ellen Hopkins is amazing, too—she writes mostly YA but she writes it in verse. Amazing!

The big one would have to be that I am a retired circus weirdo! At 26 I decided to start aerial acrobatics and tried flying trapeze and static trapeze. Shortly after, I discovered rope (corde lisse, like the fabric but one strand) and did it for a few years. I performed semi-professionally until I had a major wrist injury, which was actually how I refocused on writing again—you can’t write without a wrist, right?—so while I still do a little aerial pole, I’m mostly out of the scene these days. The second thing is that I’m an avid karaoke diva. I love singing, and I have zero problem with an audience, so hand me a mic and it’s on. The third is that I have a theatre background, and I also worked Renaissance Faire for about eight years. The stage past definitely makes live readings extra fun. :)

Thanks so much for having me here!

Email ThisBlogThis!Share to TwitterShare to FacebookShare to Pinterest
Labels: Among the Stars, Coming Together, guest post, Jade A. Waters