You know, one of the things I like to do when I work on projects like this; a sex positive blog hop, is research.

Where did the term sex-positive come from? Who utilizes it? What does it represent?

Google may not be God, but it sure knows a lot, and what it doesn't know, it can find. If that's not the classic definition of omniscient, it's pretty close.

I felt weird and unhappy after reading quite a few of these. I carry on with several BDSMers and they all seem as happy and well-adjusted (sometimes more so) as most people,

And I really don't like hearing them talked about as if someone's robbed them of their agency; that no one can actually consent to kinky behavior, and at the same time, I'm very much anti-rape culture, and I understand that saying yes and meaning yes are two completely different things, and from an outside perspective, it's hard to see the difference. And by outside, I don't just mean strangers outside the bedroom, I mean outside the Head of the Person who's giving consent.

Example: I had a live-in for a while who used to ask for sex regularly (which is fine) and he would never actually start things if I said no (also fine) but who would, for lack of a better word, nag. Bedtime became this ritual of him asking, me saying no (because after a while of this, I never wanted sex.), him letting me drift off to sleep and then WAKING ME UP to ask me again. This would go on and on until I'd finally just let him so that I could get some sleep.

Eventually I became so conditioned to it that I would just say yes the first time, rather than risk another night of being woken up every thirty minutes or so.

Did I consent? Yes.

On the complete and total other hand, my husband and I have  on many occasions, engaged in sleep-sex. In the morning, it's quite clear that someone started it, and both of us finished it, but neither of us actually remembers who started it... I have literally woken up mid-penetration, on the brink of orgasm. And personally, I love it.

Did I consent? No.


One of my friends likes to say I'm a walking contradiction; a feminist who is also a stay-at-home mother who considers doing the dishes part of my job, an LGBT erotica writer who hasn't had a sexual encounter outside my marriage in 18 years, a middle-class, middle-aged white woman who passionately believes that "redskins" as the name for a football team is horrible and should be stopped immediately, an atheist who throws an elaborate Christmas party every year, and a nerd-girl who has fought for her right to be present at the gaming table who spends quite a lot of virtual money making her online characters look sexy...

We argue voraciously about whether or not I'm "allowed" to call myself feminist when I write erotica.

My mother is furious with me that as an educated woman (I have a bachelor's in English) and someone who entered the work force at twenty-five, that I chose to get married and stay home with our child. I took all the rights that she wishes she had and decided to do the same thing that she felt forced into... (apparently the fact that I have serious health issues and actually really hated having an 8 - 5 job are irrelevant...)

Another friend and I argue about the "erotica for women" title that goes on a lot of the books from certain publishing companies I work for... that he feels denied a more prominent place at the table in the realms of sexual writing. What seems to be true about porn also is often true about erotica writing; it's one of the few places in the world where the recognition/pay-rate is significantly tilted in favor of female artists. My solution to this problem (while I do roll my eyes about it because jeez, he's mad because he can't sit at this ONE TABLE, why not go sit at the other 5 million places instead of trying to squeeze into my space... I agree that he's right, while still feeling resentful at what sometimes seems like an effort of crowd me personally off the bench...) is to make sure that my own anthology was very inclusive. Of twenty-one writers, seven are male, at least two I know for certain are persons of color, some are lesbian, some are straight. I'm actually very pleased with the diversity of my anthology...

I'm lucky, in many ways. I'm a middle-class white woman who does not work in a corporate job, which allows me the freedom to act and think and say whatever I please because there's not very many people who hold a position of power over me. (One of my friends is a kindergarten teacher and her friends are not allowed to take pictures of her while she's intoxicated, or at a party, or wearing anything that might be considered sexy, or pretty much anything that doesn't show her as being sober, sane, responsible and having a skirt that covers her knees because she really could lose her job for, you know, being a FUCKING ADULT.)

I've occasionally fretted that my daughter might bear the brunt of some of my decisions, although so far that hasn't come up. In fact, one of her teachers is a fan of my work, something I find mildly weird, and then I get grouchy with myself for feeling weird about it because she's a nice woman and she obviously has sex and knows how to read and there's no reason why I should feel weird about it...  on the other hand, I also feel weird that one of MY teachers from high school reads my work...  but I obviously feel strongly that my teacher FRIEND should be given all the rights of being an adult, including the ability to be herself and have a drink...


It does seem that sex positive, as a term, is polarizing.

Sometimes I wonder if this extreme, if you're not with us, you're against us, mentality is anything new, or it's just that I pay more attention now.

Virgin vs. slut
Sex positive vs. prude
empowerment vs. exploitation
right vs. happy
gay pride vs. religious freedom
rape culture vs not all men
consent vs coercion

It often seems to me that we all know there's no one right answer for everyone, and are determined at the very same time to MAKE IT WORK THAT WAY.

Does that apply if your kink is Asian women? Dubious consent? Rape fantasies? Animation that portrays animated children in a sexual situation where all the actual voice actors were over 18? When does your right to feel/think/act as you see fit end... 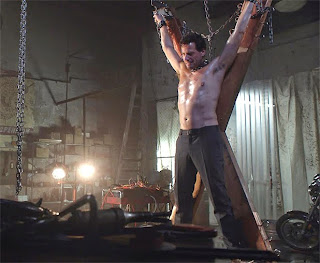 The show also featured an older-love relationship that I thought was well done and very beautiful and sex positive. Older people who are not necessarily beautiful or perfect, who have wrinkles and beer bellies, have sex, too. And they should have sex. And it should not be the punchline to a joke.

I know that this has nothing to do with anything, which leads me to...

That thing that went over my head? That was the point...


I've been working on this blog post for a while, and sometimes I just feel more confused than when I started...

You know, I'm in my mid-forties and I should not at this point be questioning my sexual orientation... except just recently bisexual has become a bad word and everyone's trying to tell me that pansexual fits better. Personally, I'm not keen on the word pansexual - sounds like I have a kitchen fetish - and bi has always worked for me. But apparently the fact that I have an enormous crush on a transfemale ace makes me "pan" rather than "bi."

Sometimes I really don't know why we need labels. What words are particularly triggery to me are perfectly okay with someone else.

I have a British friend who calls me both a "silly cow" and a "cunt" from time to time, and from anyone else in the world, I wouldn't allow it.

I use bitch (-y) as an equal opportunity word to describe both my guy friends and my girl friends. I say y'all as my gender neutral pronoun. I am totally okay with cis and cisgender as legit words and I was horribly uncomfortable when a gay friend of mine told me I was about to meet a transfemale. Mostly because it would have never occurred to me to ask, and secondly, I don't think it was his right to out this person before I even met her.


My friends come in a lot of flavors of the rainbow. Kinky, vanilla, gay, straight, bi, trans*, black, white, Asian, Jewish (for living in southern Virginia, I have a huge number of Jewish friends...), Christian, Muslim and Buddhist (admittedly, most of my friends are some flavor of atheist/agnostic/humanist/non-theist). Lots of my friends are smut writers...

It's easy to be sex positive in a group that's largely diverse.

On the other hand, it often astounds me that even in a diverse group, stupid questions, dumb assumptions, and hateful language still come up. I've gotten dismissive commentary from friends because I "seem normal." I've been called "breeder" and been forced to defend my choices to have a "traditional marriage."

Which honestly, isn't that FUCKING TRADITIONAL... dude, really, as a society, we've only been marrying for love for maybe... 200 years? No one paid a dowry and if my husband had asked my father for my hand, I'd have flatly refused to marry him. My husband is not that dumb, thanks for asking.

I get called exploitative for writing m/m romance on one side, and filthy and perverse for writing the same from the other side of the fence.

In the end, I haven't got any conclusions or answers... I have thoughts and questions and random muddles.

The only thing I can do is constantly question my assumptions, try to better myself as a person, and refuse to tolerate bullshit from the people in my social circle. "Not cool," is my go-to phrase when one of my friends/acquaintances/colleagues says something privileged or judgmental. And I expect to be called out on it when I say something stupid.

You have my enthusiastic consent.