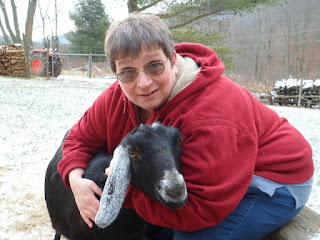 Allow me to introduce the absolutely splendid V.L. Locey. She was first brought to my attention by my editor, Elizabeth L. Brooks, who was talking about our submissions (mine and V.L.'s) for He Loves me For My Brainsss. She (Liz) was having trouble organizing the collection because my story, W.O.L. was a very serious take on the zombie apocalypse and V.L.'s... well, wasn't.

Two Men Walk into an Apocalypse is probably the funniest zombie romance story I've ever read. Should it worry me that there are several stories in that particular genre? No. It should worry you if you haven't read them all! Good stuff!

Anyway, I've gotten to know V.L. a bit since He Loves Me came out, and it's been really wonderful. She writes a lovely series of semi-mythological stories, Of Gods & Goats, and Heroes & Haybales. I cannot tell you how much I love these stories!


What are your greatest challenges in your writing career? 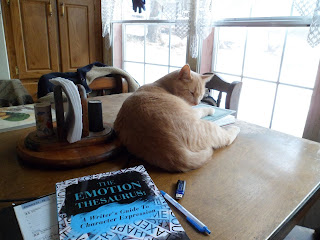 Finding enough time to get all the ideas into something that resembles a book or novella, that`s the challenge for me. I have several story ideas in files waiting patiently (or impatiently is more accurate) for me to find time to get to them and write them.

I really only discovered this passion about six years ago. I had always had stories bouncing around inside my head but never thought I could put them down on paper, and then ask people to read them. But hey, it seems that I can and folks rather enjoy my silly romantic tales. Who knew?

Boy that is tough. If I had to choose I would say it`s a tie between three: 1-My Gods & Goats trilogy because it incorporates so many of my loves and is so much a part of me and my life. 2-My Two Guys Walk Into An Apocalypse Zom-Rom-Com books because I adore Paul and Gordon and am thrilled to be able to present two gay men as ass kicking zombie killers. 3-My novel Love of the Hunter which is coming out October 2, 2013 from Torquere Press` Prizm line. Hunter is a powerful tale about the eternally young and beautiful Greek god Apollo, and the how he falls in love with a famed archer. It`s a story that was searching for the right home and it found one at Torquere Press.

Sure! There are a few old ones in my files that I think could be made into something spiffy, but, it`s that darn time constraint issue that keeps the old stories dusty. There`s this one about a sexy female space pirate . . .

The characters pick them. I keep suggesting names until he/she finds the one that suits him/her.

My first contract was with Torquere Press. I had self-published a book before being accepted into a little zombie anthology titled He Loves Me for My Brainsss that our lovely host is familiar with. My reaction was to break into a dance around my kitchen while my family gave me high fives.

At the moment I`m working on a M/M romantic comedy called Early to Rise that I hope to submit when it`s all polished up. I would love to share an excerpt! It will be quite short since I just started this novella today, but you should get a nice taste of what spurs Simon to leave Philly and move to his uncle`s farm where he meets Gentry who may just be what he needs to get over his broken heart.

The apartment Richard and I shared was on the fourth floor, apartment 4 D to be precise. I was not overly shocked to find the door unlocked. Knowing who was inside I braced myself and stepped into our homey little one bedroom flat. Sambuca came strolling up to me, weaving between my legs and leaving black hair on my rental. I was stunned and reached down to scoop the feline up robotically. I pushed the door closed and walked over to peek into one of several boxes stacked in our living room. It held all of Richard`s sci-fi books. Something happened to my throat looking at his beloved books. I found it hard to swallow. Then I looked up to see the man I had thought was going to marry me standing in the doorway of our bedroom, his arms loaded with his clothes.

“Now I see why you missed our wedding,” I ground out, hugging my black cat close to my chest, “You were busy packing to move out.”

Richard stood frozen in the doorway, his dress shirts and ties dangling over his arms. “I should have told you about my misgivings earlier,” he said, his brown eyes darting to the boxes cluttering our neat living space.

Richard finally got his feet moving. I placed Sambuca on the sofa, not giving any fucks if Richard liked her on the furniture or not. He dropped his clothes into a box then nervously folded the flaps closed. I tossed my black tie at his head. That brought his sinful brown eyes to my face.

“Thanks for looking at me. What`s his name?” I asked bluntly.

“There is no other man,” he told me. I snorted so loudly my sinuses vibrated. Richard`s long face grew tight at the derisive sound. “Believe what you want, but I`m not leaving you for another man, I`m leaving because I`m slowly suffocating, Simon.”

I get up early, do farm chores and get the teenager on the school bus (no small feat as anyone with teens knows) then I grab a fresh cup of coffee and dive into my WIP.

Tell us something domestic; favorite recipe, all about your kids, pets, flowers, or weird arts-crafts things you do.

Hmm, well, we raise dairy goats and domestic poultry such as chickens, ducks, geese and turkeys. My daughter is seventeen, pretty as a picture and smart as whip who plans to go to college and study creative writing. (Don`t know where she gets that from.) I`ve been married to the same man for close to 22 years and I love, love, love Marvel comics and movies.

(Can I just say it's awesome to know someone else who has farm experience? I grew up on a farm with my grandparents in northern New York... chickens, pigs, cows, sheeps... sheeps are dumb. DUMB. I like goats, tho.)

I have a Wolverine tattoo on my left bicep that I`m rather proud of.  Yes, Wolverine from the comic books. I consider myself to be one hell of an angler, and I make the best stuffed cabbage this side of the ridge. 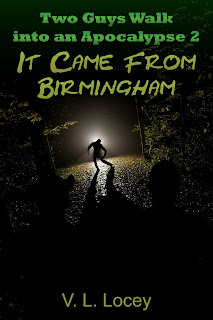 Two Guys Walk into an Apocalypse 2: It Came from Birmingham is scheduled to release on May 22, 2013 from Torquere Press.

I dunno about you, but I'm looking forward to reading Two Guys II... I admit to some severe jealousy that our editor, Liz, has already seen it....  But it's out, so GO BUY IT!

Email ThisBlogThis!Share to TwitterShare to FacebookShare to Pinterest
Labels: guest post, He Loves me for my Brainsss, Torquere Press, v.l. locey