My parental ideals were tested. Again.

I have tried very hard to maintain that I would like my daughter to be able to talk to me about sex. That I'd be open minded and understanding. After all, I was sexually active pretty young and my mom's openness with me about it kept me - well, not from doing anything stupid. I did a lot of stupid shit. But it did keep me from having awful consequences from the stupid; I didn't have any unwanted babies, and I never once got an STD.

(Aside; one of my much less sexually active friends expresses complete astonishment that I never got an STD... sex ed has been using scare tactics for so long that many people assume if you have more than 5 partners - yes, I have more than 5, in fact I have quite a few more than 5 - that you will get herpes or gonorrhea or something.)

Yes, I knew very early what a condom is and how to use it.

I was cleaning my daughter's room yesterday. 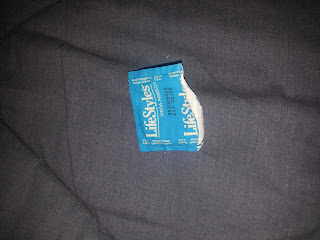 And found this, under her bed.

My daughter is nine. NINE. She hasn't even started menstruating yet.

Well, if she's having sex - already! - then she's at least having safe sex. I ponder the situation for a while. She had several friend over this past weekend; at least two of whom brought bags of stuff over. Two of her little friends have older brothers in the 13 - 15 range.

But the child is off at school and I can't ask her questions. So I think of options. K's brother could be having sex. God knows, half of K's shit ends up in my daughter's room. Heck, we have at least 2 pairs of underwear belonging to M's daughters... I'm not entirely sure WHY R leaves her panties in my daughter's laundry basket, but it's happened before.

Also, most of my friends are now sleeping with EACH OTHER. Yay, my weird matchmaking hobbies, but of the couples I've introduced to each other, one pair is engaged, one are planning to move in together, and the third are happily seeing each other exclusively. Honestly, that's not intentional - I introduce people to someone I think they might be sexually compatible with for the purposes of getting them laid... my sexually wound up friends get me slightly stressed out... lack of sex or repression isn't healthy! It's also often pretty noticeable... anyway, it's never been my plan to have people get together and stay that way for over two and a half years. It's nice though. When my friends date each other, I don't have to put up with bullshit crazy-ass sig-others that I cannot stand. Like Billy - not his real name - who was a one night stand for my friend and he just didn't go home in the morning. He stuck around and infuriated me for months. Why yes, I am a little selfish, you hadn't noticed?

That being said, it was possible that the wrapper belonged to one of those couples; two of which have slept on my sofa.

Anyway, finally the child comes home from school and I ask her about it.

After explaining what a condom is and how you use it (again. we've actually discussed this before, but I didn't have one around to use for demonstrations - one of the nicest thing about being monogamous is not needing to use them anymore, and I haven't since that horrible year after the child was born and I was breastfeeding and we didn't want to risk getting pregnant again immediately...) I texted my husband.

Turns out it's your condom. Checked the expiration date. It expired in '99.

She found it in the Legos you gave her from when you were a kid.


Did I store a condom in there? I don't remember that. Must be from high school.


I'm a Legophiliac. I admit it.