What are your greatest challenges in your writing career?

I think the greatest challenge in writing is the ability to edit competently. It’s awful seeing your first draft of your manuscript covered in red pen, but it’s something you should do. Not only does it make you better as a writer, but it’s less for an editor or publisher to do, which could potentially mean the book comes out faster.

Personally, I hate editing, but since being at university, I’ve definitely seen the benefits – academically and creatively.

Since I was a child, I always loved books and when it came to writing short stories for school, that spurned it further. I remember writing about a superhero rabbit, who lived in an old aircraft hangar with a talking potato…

I decided to become a professional writer when I started a relationship, with my partner. We watched a lot of anime, namely Bleach, which focused on shinigami’s (Death God’s in Japan). I started thinking about the non-canon characters and putting them into ridiculous situations and having love affairs. He spurred my desire to write – to give them as gifts to him  - His passion and drive, along with mine led me to apply for a BA (Hons) Degree in Professional Writing, where I learnt how to harness my own imagination. Since then, I have had success, and my partner has continued to hold onto me and keep me upright throughout.

Of my short stories, I think my favourite has to be Pawprints on a Heart. It was the first short story that was published, and it was through Crowded Quarantine Publications.

It focused on a young female werewolf, Sophie, who was trying to escape her life.

It was the first werewolf piece I had written, but it had begun life as university assignment, about a mage. I had great fun writing the piece, especially the transformation scene. I felt I could almost be the wolf (silly as that may sound), as she took her anger out on the villainous creatures that surrounded her.

I see it in my own work and others when I’ve looked over drafts for friends. Not only is it a pet peeve, but it’s one of my own issues when writing… 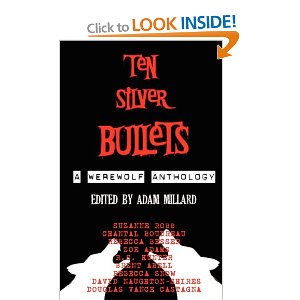 Commas. You get so into writing and you just put commas where there should be full stops. My tutor, Dr Chris Dows, says it’s a problem being comma happy, and the only way to eradicate it is to read your work out loud.

I’ve often thought about going back and extending stories and fleshing them out. I really wanted to do this with Pawprints on a Heart and turn it into a full length paranormal novel, or even a novella. The only reason I haven’t is because I can’t fathom the flow of the story, and where the scene would appear, even after writing a synopsis or two.

I suppose character names all depend on the genre of what I’m writing. If I’m writing urban fantasy, I find it quite easy to use a popular name. Sometimes if I feel stuck on a character, I browse through my Facebook friends and take inspiration from there.

When I was working on a piece about shinigamis for a university assignment, I put great consideration into names and their meanings. That’s always important in a character. I browsed baby name sites and made a list of various names. I had an outline of what the characters were like and that really helped when it came to choosing the final name.

Pawprints on a Heart was the first short story that was published, and it was through Crowded Quarantine Publications.

I had heard about a competition that was open to werewolf fiction, so I found their website and checked the submission guidelines. I wrote a polite email, attached my short story, and off it went.

A few months later, I had an email at ten o’clock at night. When I saw that it had been accepted, I squealed! I was completely over the moon, and when the reality had sunk in, I was overcome with emotion and cried my eyes out.

It was the start of a career, a foot on the ladder. That first acceptance has only made me more determined.

I struggled with a lot of negativity in my life and really struggled to hold onto reality. I wrote my thoughts on a random word document, and before I knew it, I had written a short story. It’s due to be published by Crushing Hearts and Black Butterfly Press in the upcoming Dark Light 3 anthology.

The plot generally wrote itself:

Hayley's life had been great until one fateful night changed all that. Deciding to take matters into her own hands, she prepares to end her life. When the musician she idolizes stops her and encourages her to tell her sad story, she gets more than she could ever bargain for.

Its surprises me how much of my life and the people around me find their way into my stories. Sometimes its events, sometimes its thoughts. Once I purposely wrote a vile and nasty character and based her upon someone I knew quite well – that was fun to write.

Sometimes I see myself in characters, and it’s happened subconsciously!

I always have documents from different projects loitering around, but I’m hoping to start the second book of my trilogy soon. The urban fantasy trilogy holds a lot of Japanese mythology, namely the alcohol demon known as a Shōjō.

The following excerpt is from Chapter Five of the upcoming, ‘Best Served Chilled’, published by Crushing Hearts and Black Butterfly Press.


Above her, the shōjō began to glow a brilliant red. His skin bubbled, as he pulled her energy into him. He drank in her nightmares, fears, hopes and dreams. Jealousies from childhood rose to the surface.

Stronger and stronger, the shōjō grew. This had to be the most satisfied he had felt in such a long time. True it was a shame her old man had to die, but at least he’d been happy for a short while.

And now to find his affections after all these years… Oh he couldn’t have wished for anything as sweet as this. Father like daughter. And the corruption was ever so easy.

These little humans were his idea of fun. They were the perfect toys; fun for hours and so easy to break. With the right beverage, he just had to seek them out. Other demons might sneer at his profession but he didn’t have a care in the world. Especially right this second.

When it comes to my writing, I don’t set myself a specific time slot. However, I set myself word limits, almost like a deadline. If this is a chapter or a scene, I will try to write at least 1,000 words a day. If I can reach over this mark, it has been time well spent, even if I don’t essentially know where it will eventually take me.

My desk is commonly known in my household as the kitchen table. I prefer to sit in front of the fridge, chair facing the table and door, laptop before me, radio playing, and write (usually surrounded by papers, pens and books).

I work well in the kitchen  - a place where I feel safe and secure in my writing bubble. Even with the washing machine whirring or the radio blaring or my mum to-ing and fro-ing these aren’t distractions. It’s almost like a comfort blanket.

My villains often come back to the forefront of my mind when I’m writing. I find that they’re the most interesting characters to write. They’re so dark and haunting, with troubled minds and pasts. Some are more complex than others, some are just straight up evil.

My favourite villain to write was Shoichi, the shōjō of my upcoming novella, Best Served Chilled. I took great fun researching different Japanese fashion in Harajuku and amalgamating some styles into my sexy, yet bad ass character. 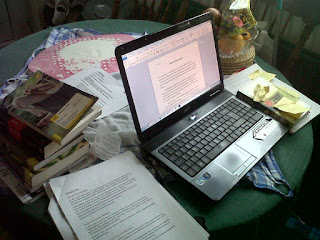 There are a lot of must read books out there and they spread across the genres.

One book I must say is a must read is Memoirs of a Geisha by Arthur Golden. While a historical novel, it was rich in information. It was a beautifully woven tale, with vibrant details and believable characters. It has stuck with me since reading it on holiday.
To date, it is one of my favourite novels.

1. I idolise the film Labyrinth (1986). I have collected numerous amounts of merchandising over the years. Things range from figurines to books to numerous copies of the film. The most expensive piece was the novelisation of the film and was around £40 online. It’s still in the plastic wrapper on my bookshelf.

2. I met Wil Francis in the summer of 2010. He’s a musician and fronts Aiden and William Control. I met him before and after the gig with a friend before staying overnight at a hotel. When we went downstairs the next morning, he was sat having breakfast! I was so startled, but on the plus side, it meant having breakfast with my idol!

3. My name is Greek for “life”. Since discovering this as a child, I became fascinated with mythology and legends. I’ve travelled to various islands on holiday, taking in all the historic aspects. This fascination led me to write my first full novel based upon the Greek nymphs.