Like one of those favorite friends who drops in randomly to grab a cup of coffee and share a bit of gossip, Sommer Marsden hangs out at my blog... I've hosted her here several times and I talk about her a lot (in fact, I sold a copy of her book for her yesterday. I was talking to one of my girlfriends over lunch and said I'd just finished reading it. As she's forty-seven and just getting back into the dating scene after she lost her fiancee in a terrible accident last year, and the first person her sister tries to set her up with is twenty-six, she cracked up when I told her the novel's premise. I just sent her off the buy link Friday morning...)

So, I'm going to hand it over to Sommer while I get us some coffee (Burundi, single source. Good stuff.) 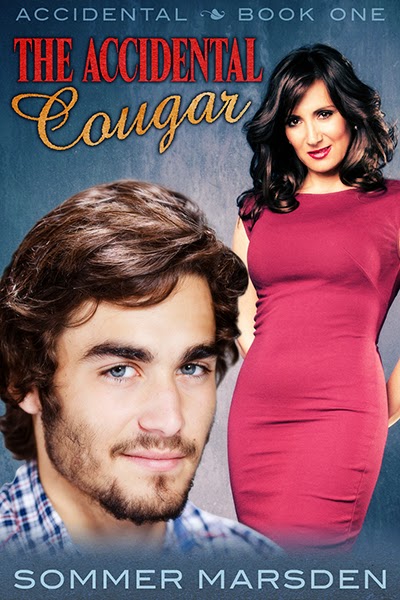 It wasn’t hard to write the beginning of The Accidental Cougar because I knew exactly how Abby felt when Charlie did a double take and gave her a longer look. When that happened to me in real life a while ago, it happened during a particularly crappy week here at Casa Sommer and I looked, quite frankly, like a cast member of the Broadway show Rent. I had on multiple layers of multiple things, no makeup and my hair was wild. When that young man did a double take I assumed it was because I was shockingly unkempt.

Until he smiled. When he smiled I realized he’d did a double take for a whole different reason.

And I came home and started the book—like a speed demon. Abby was born and she was just as flabbergasted as I was about that lingering look. Only she went on to explore it. Me? I just used it as a kick in the ass to start a novel.

So, dark haired, handsome young man out there, wherever you are: Thanks for the books. And that long look. And the smile. It was exactly what I needed—on many different levels.

I saw him coming. I just wasn’t paying attention. My eyes found him, glanced off, and went to my bag again. Cell phone, wallet, lip gloss, book…my usual OCD check upon leaving a store. I glanced up at the young man pinpointed by a stark ray of sun, and looked right into the dark blue of his eyes.

Northern Drug wasn’t a big place, and I knew almost everyone who worked there. I’d raised two children and had probably spent at least a year’s salary over the years on band aids, ointments, prescriptions, acne creams and sanitary products.

Irving was the pharmacist. When he was out Mary or Darren filled in. There were three women and two men who usually manned the non-pharmacy part of the store. Mr. Tall-dark-and-handsome wasn’t one of them.

All of this swirled through my head as he shot me a coy smile—downright flirtatious—and raised a hand in a wave.

I found that my own hand, a mere ghost of itself since I couldn’t seem to feel it, raised of its own accord.

I could barely make out his name from my driver’s seat. Charles.

“Thank God I’m farsighted, Charles,” I muttered but then I realized he’d cocked his head in my direction, catching the fact that I was talking.

He raised his eyebrows and delivered another half-smile. What a half smile it was.

He raised a hand again, this time in a ‘were you talking to me?’ gesture and I realized I’d never been very good at charades. I shook my head and waved at him, laughing dramatically so he’d know I found the whole thing funny.

Pat, one of the women who worked almost every weekday, stuck her head out and called out to him. He looked a little crestfallen, it was a pretty cute look on an already cute guy. I got another half wave and then he sauntered toward her, all perfectly fitted jeans, low top Vans and navy pullover.

“And dark, curly hair that’s a little too long, let’s not forget,” I said aloud. “You uber perv.”

I started the car and left, hell bent for leather that I’d put Charles-the-young out of my mind.

What would be the harm in a little fling? What would be so bad about bedding a young man who could technically be my son? He wasn’t my son. He wasn’t my anything. But he could possibly, if I could unclench my ass long enough, be my lover.

What was so bad?