Coming Together: Among the Stars was released yesterday, and I hope you've had a chance to pick up a copy. If not, please do... 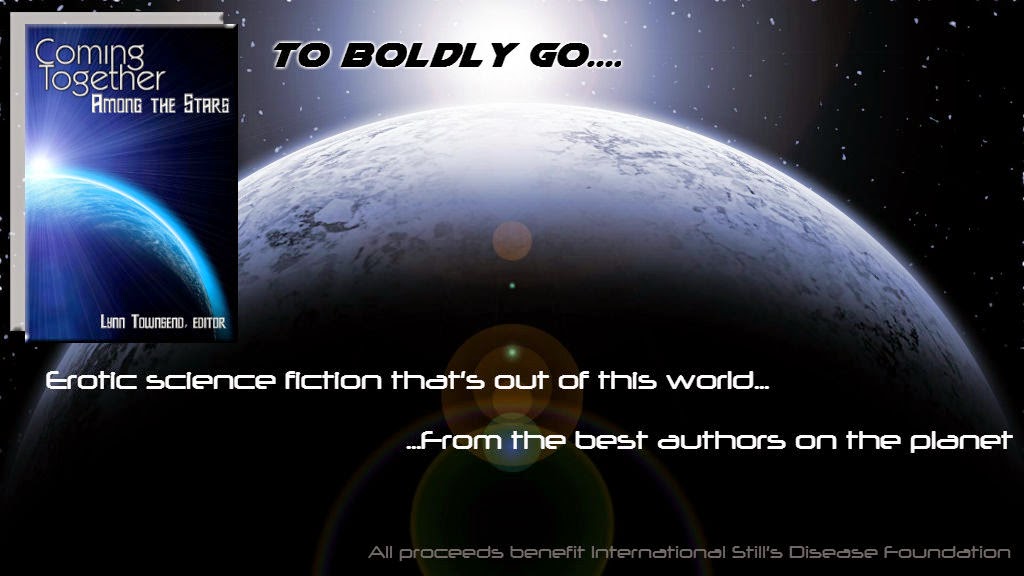 So... Blissemas is still the thing, of course... John (Bawdy Bloke) has a blog thing for you, so go check that out and don't forget to comment every day for your chance to win a kindle paperwhite full of smut.

And Torquere is still giving away one or two books per day, so let me lay those out here for you...

Jumping into Things by Julia Talbot

What are the odds that two different brothers will find the man of their dreams in one summer?

What are the odds that those two brothers will both like men?

Likeable men, hot sex, and a great sense of detail make these brothers believable, even when you think the odds are against them.


My Life as a Myth by Huston Piner

It's 1969 and high school freshman Nick Horton has got problems; he's an easy target for bullies, he's a social outcast who dreams of being popular, and he doesn't understand why he's just not attracted to girls. So after a series of misunderstandings label him a troublemaker, he's delighted when Jesse Gaston and his gang befriend him. But while Nick just wants to explore his growing attraction to Bobby Warren, Jesse's campaign to give him a new image soon transforms the shy loser into an anti-establishment student hero and before long, Nick discovers that if it wasn't tough enough just pretending to be straight, now he's got to act cool too! As Nick strives to understand his emerging romance with Bobby he also finds himself besieged by would-be girlfriends. At the same time, he also has to deal with increasingly dangerous goings-on at school and the Vietnam War's destructive impact on his family.

Nick's freshman year is a remarkable journey of ridiculous misadventures, unexpected psychedelic explorations, and tragic turns of fate.  Is a world still reeling from the sexual revolution and the illicit pleasures of marijuana and underage drinking ready to accept two boys in love? Can Nick and Bobby's relationship survive a world where acid rock rules, status is everything, and being gay is the last taboo? My Life as a Myth is an often humorous but ultimately heartbreaking story of a boy's struggle with sexual identity and first love in a violent and hostile world.

Yesterday, I spent all day working on the galley edits for A Marked Man, which will be available on Thursday. If you haven't already signed up for my Facebook Release Party, please do. (It's not a real event, you just have to check your computer and say hi...)

There will be some fun prizes and contests, and mostly I'll just be hanging out for the day (it's 2 - 11pm EST, so really, you can drop in for most of the day... )

And while I was working on that, I started to write this blog entry, which was supposed to plug Fair Game, my lesbian story... only to find out that once again, the publication date has been pushed off. The publisher was recently bought out, and schedules and staff are all off and crazy...

I probably shouldn't say much more about that because what I'm thinking isn't very nice, even if it is true, and we all know what's been going on with people who say not nice but true things about publishers.

ANYWAY, it's probably a good thing. I was looking - originally, several weeks ago - at a pretty crazy week... Coming Together: Among the Stars out Monday, Fair Play out on Wednesday, A Marked Man and London Steam out on Thursday....

Now with some shuffles around and movement, I only have two releases this week, although they're both major, and I hope you'll bear with me while I try to get my life on straight...

On the other hand, while I was working on galley edits all day - and I'm going to give a special shout out to my editor, Elizabeth Lance, who tirelessly put up with my nitpicking, my bad dialogue tags, and my horrible inconsistency, and who loves the story nonetheless, and who continued to be encouraging and supportive through the whole messy last run. Thank you, Elizabeth. I don't deserve you, I really don't. - I got two. more. sets. of. edits. in.

So much for getting any actual WRITING done this week...

I have built about 4 weeks of screwing up, screwing around, hating my work and time for story bloat into my schedule for Sins of Angels... technically, since the Demoniac Codex series is coming out once per year (in March) I don't really have to have the book completed until August, maybe? And right now it's slotted to be done by mid-April.

I'm well ahead on the Rainbow Connection series, with Book Three already written and in beta edits right now...  (for comparison, Blues wasn't even written until April this year, so... that project is well ahead...)

The question after I write Sins of Angels is... do I work on All that Jazz (Hector's story), write the YA novel I've been poking around with (Hailey's Comet, a contemporary), or work on my steampunk m/f romance (The Wormwood Trade)... at some point, I'd like to get all these done. Plus I have the series of YA novellas for 2016 (the outline for the first novella is due in March) to work on...

Email ThisBlogThis!Share to TwitterShare to FacebookShare to Pinterest
Labels: Advent Calendar, Among the Stars, blissemas 2014, Coming Together, crazy writer, For Love of the Soldier, free reads, Torquere Press