Hello everyone, your favorite crazy writer here... (I may well be truly losing my mind, it's possible. Come visit me in the mental hospital, would you? It gets boring.)

Today I have... Blissemas with Tabitha Rayne (who I was introduced to recently because she did some lovely portrait work for my dear friend, Malin James... so y'all should definitely go check her out...)

And A Marked Man is out today - I'm having my Facebook release party today as well, so if you haven't signed up, drop by and say hello. I'll be giving away prizes and swag, posting excerpts, taking questions, and generally being "around" for most of the day...

Our protagonist in Evergreen, Liam, is a supporting character in Starling, Book One in our Love in Los Angeles series. (Book Two, Doves, comes out January 21, and Book Three is out in June), but this is a standalone story and you don’t have to have read Starling to be able to enjoy Evergreen.

In Evergreen, Liam’s joined by several characters that readers of Starling have already met. These include his fiancee Carly, his asexual boyfriend and also boss Victor, and his costar and ex-lover Alex. Throughout the story, Liam pesters them for help sorting out his woes with his childhood best friend and long-term lover Charles. Unfortunately for Liam, however, they’re all tied up -- figuratively and otherwise -- with their own relationship issues.

Throughout the story we see bits of all of those negotiations. And all of them are kinky in some way to someone. After all, the title of the anthology Evergreen is published in is Santa’s Little Kinksters. But what kink looks like for each couple in the story is different.

Sometimes, that kink is pretty explicit. There’s not much that’s understated about someone being tied to a bed.

Other times, however, the kink is much more subtle. It’s all still kink, though, even if it’s just someone getting excited about the marks his fingernails leave on his boyfriend’s skin.

So here’s to all the kinksters, Christmassy and otherwise, and all the adventures and exploits they get up to at the holidays and year-round. 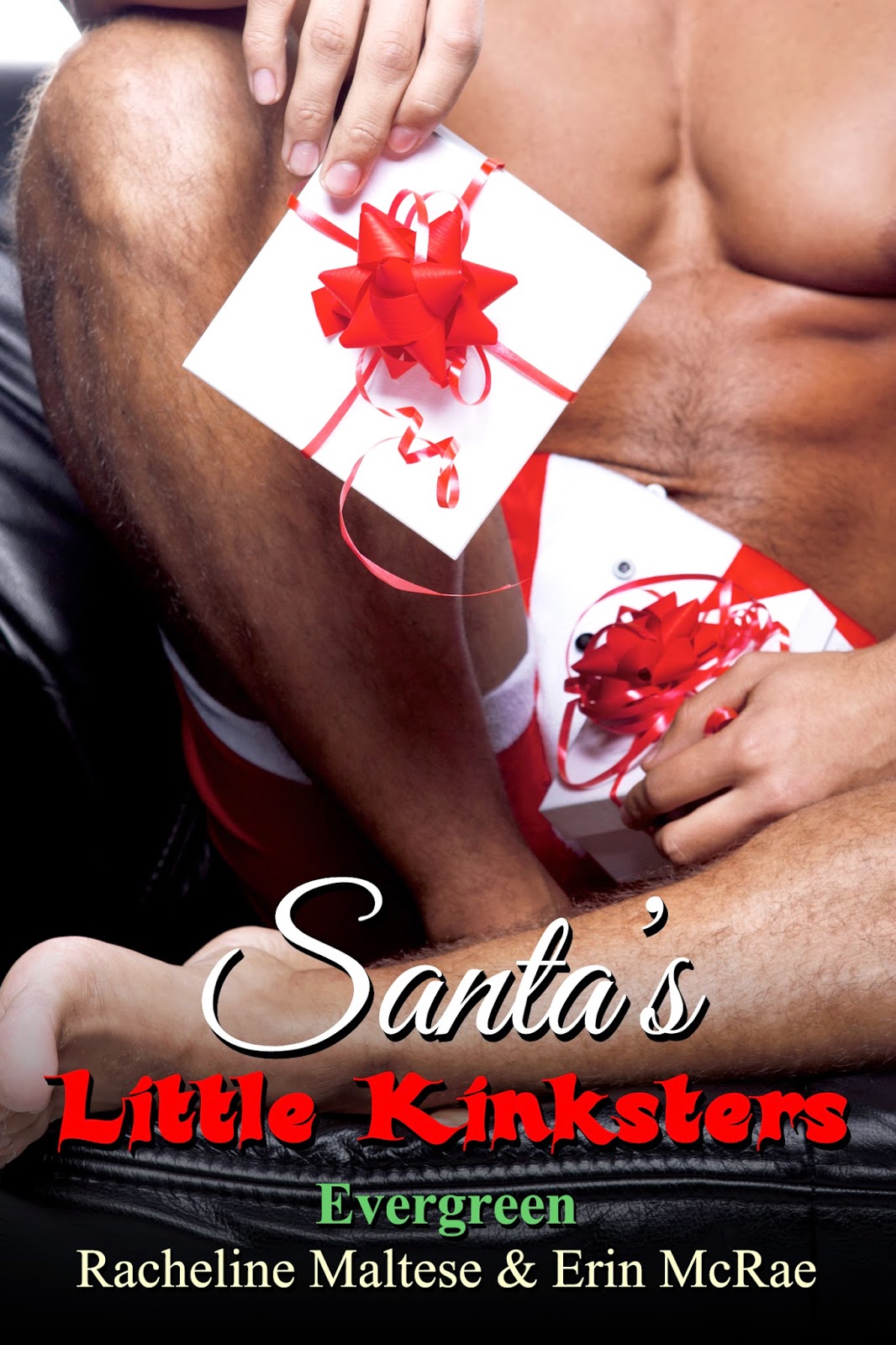 When bisexual polyamorous TV star Liam Campbell returns home to New York City for the holidays he finds out his his best friend (with benefits) Charles Ortwin has recently acquired a serious boyfriend. Thrown by not being the center of everyone's attention, Liam seeks out advice from three of his chosen family: ex-lover and co-star J. Alex Cook, boss and asexual romantic companion Victor Salcido Santillan, and fiancée Carly Amadahy, each of whom are tied up with their own sensual pleasures.

When a holiday party ends in a series of arguments between Charles, the new boyfriend, and Liam, it takes a snowy Christmas, a bit of honest communication, and some delightful sexual agony to put everything back as it should be.

Erin McRae and Racheline Maltese are authors of the gay romance series Love in Los Angeles, set in the film and television industry (Starling (September 10, 2014), Doves (January 21, 2015), and Phoenix (June 10, 2015)), all from Torquere Press. Their gay romance novella Midsummer (Summer 2015), about a summerstock Shakespeare company, is from Dreamspinner Press. Racheline is a NYC-based performer and storyteller; Erin is a writer and blogger based in Washington, D.C. They write stories and scripts about the intersection of private lives, fame, and desire.

The Sexy Librarian's Big Book of Erotica is out on audible.com... so if you like to listen to your smutty stories, they're now available that way...


Torquere's still giving away two free books every day, so here's today's offerings. You are downloading these, right? I am. Every. single. one. I anticipate reading quite a lot in 2015...

The Angel. That’s what the young hustlers call Noah Everett, the man who’ll help them get off the streets. Once a hustler himself, Noah doesn’t take his own good advice, which is, “Don’t let this ruin your life.” Haunted by the past and those he couldn’t save, Noah carefully keeps others at bay until his self-imposed loneliness is shattered by determined, ambitious, but homeless eighteen-year-old Jeremy Kincaid.

A ruthless pimp has targeted Jeremy, but if Noah will fight to get anonymous young men out of the life, he’ll fight harder to keep Jeremy from getting in, even if it means a return to old stomping grounds to make a deal with the devil. To save Jeremy, Noah risks more than just his body. He risks his soul as well, because Willie Carnell, pimp, was once Billy Cordell, Noah’s lover.

All I Want for Christmas by V.L. Locey

Alexander Dawson thought this Christmas would be a lonely one. He has no way of knowing that his cantankerous cat, Mister Tibbets, will turn a simple online shopping trip into a cataclysmic Christmas conundrum. Alex ends up on a madcap dash to another state during a snow storm to return a painting to dreamy wildlife artist, Cooper Reynolds.  Once he stumbles across Cooper's remote log cabin, he and the sexy but emotionally distant painter end up sharing more than a kiss under the mistletoe.

Things aren't all holly-jolly for the men though. Cooper gets a terrible case of icy feet, and Alex hits the road as soon as the snowplow clears it, feeling hurt and angry. Can Alex, Cooper, and their feline friends find a way to have purrfect holiday together?